Look, we got electricity... and we got each other.

Aqua Teen Quote of the Day:

"Master Shake: [trying to calm Frylock down about the bills] Look, we got electricity... and we got each other.
[electricity is cut off]
Master Shake: Look, we got each other. What, are you gonna bill us for that now?
Frylock: You are about to learn a lesson in responsibility Shake!
Master Shake: I'm responsible... for getting us into that club that one time. I smooth-talked that dude. You saw me lay it down.
Frylock: Frankly, Shake, I can live like this. You can't. And if you don't pay these bills, we'll just see how long it takes before you go out of your freaking mind.
Master Shake: I'm not backing down on this, *ever*!
[falls off chair]
Master Shake: Turn on the lights, I want you to see the look on my face! Do you hear me? Or did they send a guy out to shut off your ears because I didn't pay the ear bill?
[Shake crashes through a window, landing in the front yard]
Master Shake: [shouts] Where the hell is the switch? 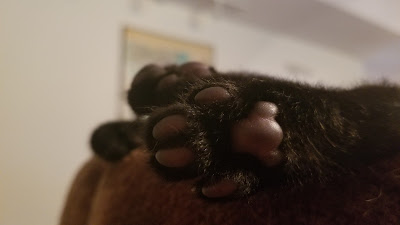 I always take photos of kitteh feets.  Manny was in kitteh snooze land when I took this.  He is a black kitten.
The first set of photos are of my WiP Imperial Guard Mordians.  An astute reader may notice that these guys are not Gee Dubs models.  That is correct.  I have major scale creep issues with scale and especially heroic scale.  It's to big (that's what she said)!  Look at the photo of the Mordian soldier below.  His lasgun is very slim.  I think everyone knows how giant and chunky Cadian models are.  Bleh.  They are way to big.  I wanted to change that.  A space marine should 10 feet tall in his armor.  A human is still 6 feet tall in 40,999.99. 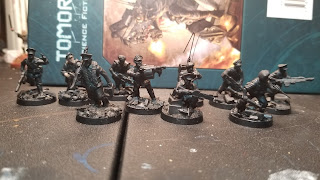 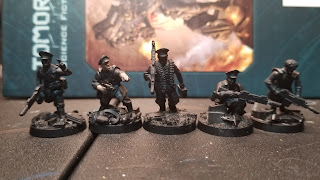 I chopped up lasguns and glued them to strips of plasticard.  The dimensions are 2-2.5cm long, 2mm tall and around .5mm wide.  The end result looks like the lasguns in the 8th edition IG codex.  The same issue applies with the IG heavy, crewed weapons.  The Cadian heavy weapons are FAR to big for these models.  My Veteran squad has an MG42 as a Heavy Bolter.  It looks great alongside the slimmed down lasguns, autoguns, shotgun and laspistol.  Oh, I even chopped up a Cadian grenade launcher into a more digestable form.
The Heavy Bolter guy is a chopped up Cadian model.  His arms and head are Warlord plastics.  He looks slightly larger than the other guys.  That was intentional.  I wanted a big, space corn-fed Mordian boy carrying that machine gun.  The Veterans are also severely out of regulations concerning dress codes.  The other squads will all be dress right dress.  The finished platoon will feature a platoon leader and staff, a Veteran squad, four regular squads, a mortar squad and a heavy bolter squad.
The second photo of models are my militia squad for Rogue Stars.  Double duty. 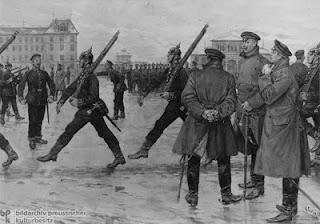 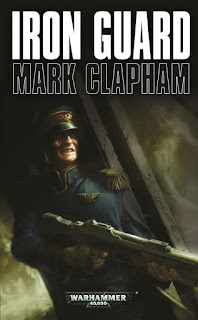 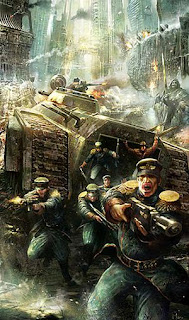 Here are a few source photos for my Mordians.  I used Warlord Games Blitzkreig Germans.  I decided not to give regular grunts the shoulder fringe.  They still have the trim, shoulder boards and service caps.  Officers and officials will get shoulder trim, egualettes and other decorations. 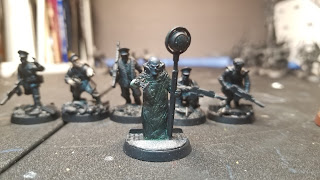 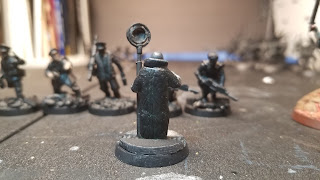 This is my A$$tropath (Astropath).  They are the mysterious psykers who communicate with other astropaths from planet to planet.  I believe they have other duties.  In 40k he can force enemy squads to not get cover saves.  I kept him in true-scale format.  My idea for him came from Guild Navigators of Dune.  The 3rd stage Navigator who communicates with the Emperor has a aide who carries a speaker thing on a staff.  I included that as a nod to the book.  The other pic is of a French chaplain (at least I think it is).  Future models will be true-scale and have more realistic uniforms and equipment.  I don't like all the sci-fi gothic iconography that makes up the 40k universe.  I decided to make a more realistic year 40,000. 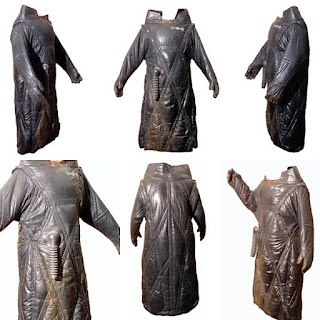 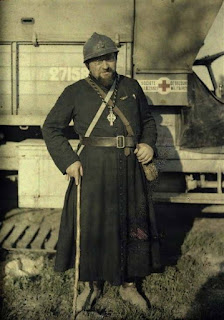 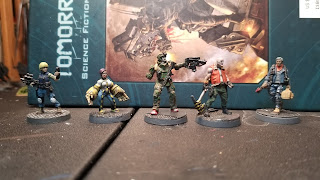 Here is another movie nod.  This is a deep space salvage team for Rogue Stars.  They are a Merchants team.  The idea came from all those years of watching the salvage team in "Aliens".  I was always curious about them and their short time on camera.  The girl captain (Captainette?) is on the far left.  The Droog heavy lifter is next.  The team's close protection and security person is next.  Orange vest guy is the XO of the team.  And finally the engineer of the team is at the far right.  These models are all Hasslefree miniatures except for the security guy.  He is a Minuteman from Infinity. 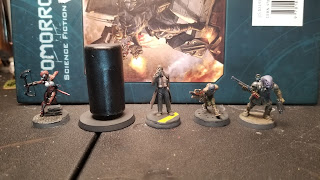 Next up is my StarCops squad.  I got this idea from the Dan Abnett 40k series about the Inquisitor who was mortally injured.  He has to be sustained by a hermetically sealed, floating coffin.  The series is what made me start thinking about a more low tech, true scale 40k universe.  Well, Dark Heresy also influenced these ideas.  The leader of this squad in the big, black cylinder.  It is a state of the art statis tube.  It is completely black until you get close to it.  Pertinent data superimposes itself on the tube when someone closes in on it.  The space detective inside can also display messages, graphics and other signals on the tube's surface.  The man in the tube was fatally injured and forced to be sustained by the tube.  His already significant psychic powers were further amplified after the loss of his other senses.  He has carte blance to recruit a team of mercenaries, soldiers, criminals, etc to help him in his crime fighting efforts.  The gal with the bow is only known as the Nameless.  She is the detective's infiltrator and bodyguard.  This model has nothing to do with Deadpool or those 40k death cult chicks.
The guy in the trench coat is Micheal Togusa.  Yes, I based him off of Ghost in the shell.  Togusa is the investigator of the group.  He is the thinker and contigentcy planner.  The next guy is an Infinity Zero.  This character is a trouble shooter.  He is very well rounded and useful as a general operator.  The last fellow is the newest addition to the detective's retinue.  He is a Geek miner who had some run ins with the local Star Police.  The Detective gave him a way out of his long list of petty crimes.  I still need a name for the Detective and the Geek criminal.
The Droog are Space Dwarves.  The Geeks are a race of sentient plant life.  They completely exhaust a planet's resources and then move on to a new one.  The Droog encountered the Geeks centuries ago and allowed some of them to settle on the Droog homeworld.  It was a disaster as the Geeks' constitution makes them very durable.  They engage in all sorts of mining practices and activities that have an adverse effect on the environment.  The Droog didn't appreciate this as they consider the land and it's geoscapes as being alive and linked together.  Their manufacturing practices are very ecologically sound.  The Droog are slow to anger, but they have had their fill of the Geeks.  This led to a long, bitter war between the two races.  The resentment still exists between the two. 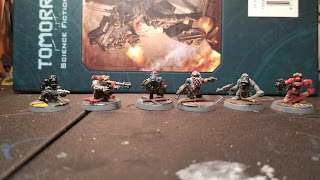 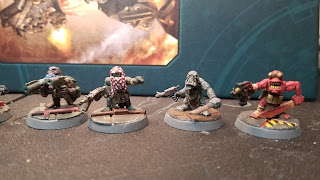 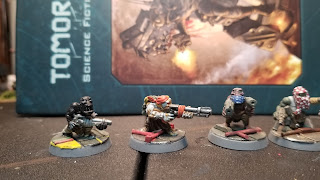 Here are the Piratical Rocks of the Outer Rim.  One day a Human mining ship discovered a distress beacon coming from deep space.  Since they were the only ship in the area they felt compelled to assist.  What they discovered was a ship of unknown design that was barely functioning.  When they boarded the ship they were met by strange, rock like creatures.  The Rocks were not aggressive or openly violent.  But they proved to be a nuisance by confiscating anything they could find.  The mining ship had to abort it's deep space mining run because these "Rocks" had jeopardized the ship's primary systems including life support.
These "Rocks" are very hardy.  They can survive in deep space for an undetermined amount of time.  Their society (if you could call it that) has absolutely no sense of ownership.  Items of all types are freely taken from one Rock and then taken by another Rock.  The Rocks are terminally curious.  They are also almost completely impervious to most forms of violence.  Since their first encounter with civilized space they have learned to fight and defend themselves.  They are not pirates in the traditional sense.  It's just that they are so annoying and pesky that they are naturally treated like pirates.  Most Rocks are violent upon contact because they were always attacked when they tried to contact other ships.  Now they openly attack other ships, people, etc because they think it's what should be done.  Only a desperate ship's captain will hire on a Rock for an expedition.  The Rocks come in many different types and flavors.  Some are useless Granite or sedimentary rocks.  Others have naturally growing gold and diamonds on their crust.  These rocks are sought after for their naturally recurring wealth.  These rocks are also very rare.
This squad has 6 models.  There is Iggy-Naceous (Black shiny rock), Core-utz (rifle), Gran-zite (two pistols), Die-mund (Table cloth mask), Seddy-Mentary and Mag-Mah (living lava Rock).  These guys are actually cut up Space Ork plastic Grotz. 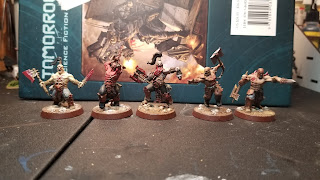 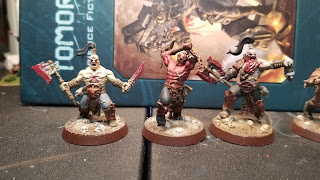 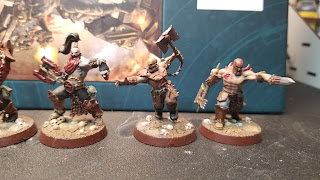 I suspect everyone knows about Shadespire.  Here is my Garrek's Reavers warband.  They were great fun to paint. 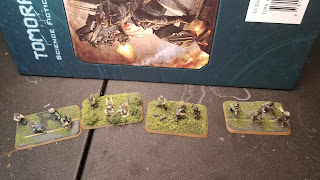 I finally finished my Dew Raiders.  These are the last few teams that complete the force.  I really like the guy with the afro and the side burns. 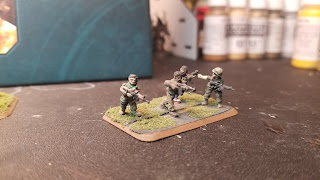 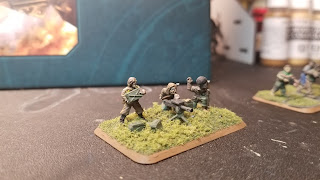 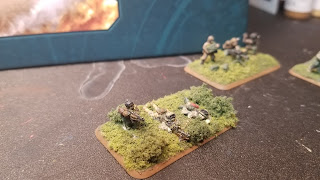 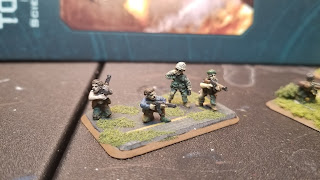 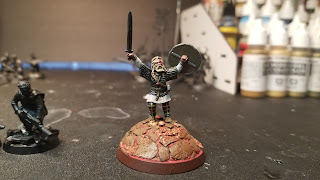 I made a DarkOath Champion for Age of Sigmar.  This is a gripping beast armored huscarl leader model.  Once again, I used true scale 28's to depict regular humans.  The Khorne BloodBound are blessed by Khorne and consequently super huge with muscle and girth.  Regular barbarian tribesmen who struggle survive the winter are more lean and desperate.  Enter my Chaos Marauders.  They are normal men.  They still get mark of Khorne though. 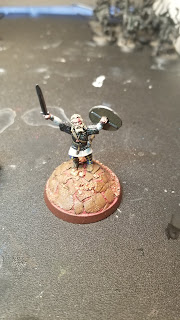 Posted by NerdWargamer at 4:44 PM