And be sure to thank Sir Loin for keeping me up all night. Yeah, I do that. Hey, I thought that oysters had shells?

I have some new goodies that I have been working on over the last few weeks.  I have a nice variety this time.
The first thing on the list today is Warfare in the Age of Madness.  I have started the warband that I am really excited about.  This team is an inside joke between a friend and I that goes back at least 20 years.  I will explain the joke on a later day.  This warband is called the Dew Lords or Dew Scavengers if someone wants to be condescending.  The only focus of these men is to roam the countryside looking for cans of Mountain Dew.  The warband is entirely mobile.  I only have a portion of it.  The last vehicle had some mail issues and has to be resent to me. 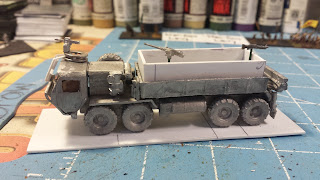 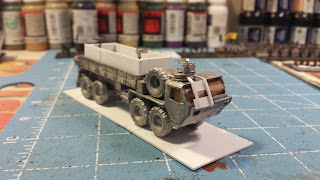 Here is the gun truck built around a HeMMT.  I looked up actual photos and based my design on something used in deployment zones.  I want to add some detail inside. 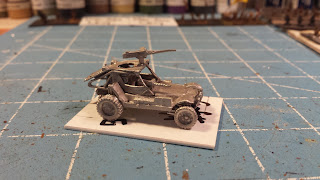 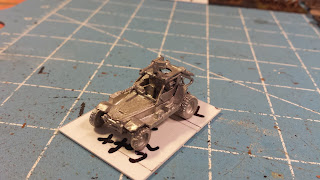 This dune buggy is one of the teams that scout ahead for Dew stashes and radio in to the convoy for support.  It is very heavily armed but lightly armored.  The HeMMT and the FaV (Fast Attack Vehicle) are from Quick Reaction Force miniatures.  They are a UK based company and have a large variety of vehicles I could not find elsewhere.  My only complaint is that the HeMMT took forever to clean all the flash and excess resin.  The FaV was easier on flash but it took me forever to build it.  I had to go to Scale Creep Miniatures and look up the photo of the instructions.  Even with that it was still challenging.  I would like QrF to put assembly instructions in the bag the FaV comes in. 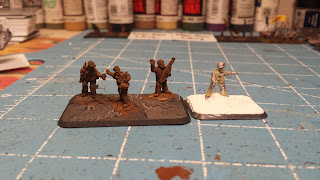 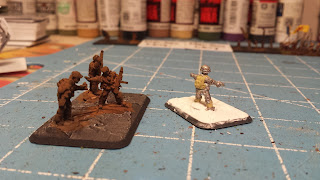 This is the command stand and the medic stand.  I gave the leader of the Dew Lords an auto shotgun.  The leader is based around my friend.  I modeled myself in the back call the column to a halt while the leader reaches for the radio man's handset.  This force has very good and developed coms. 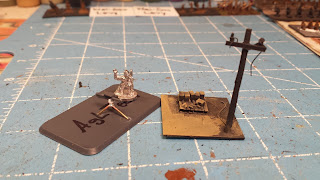 The last Warfare pic is the mk19 team and an objective marker.  I am happy that this mk19 team is my first successful soldering job.  I have struggles with trying to solder in the past.  I did the mk19 stand with no mistakes!  The stand still needs a gunner.  The objective is a pallet in the road laden down with mountain dew boxes and loose cans.  The other objective will also have mountain dew on it (each competing warband has two objectives on the table for a total of four objectives). 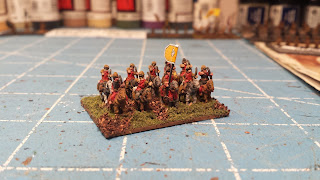 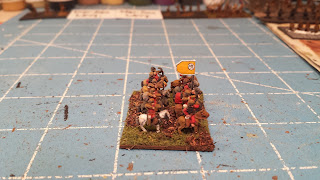 Irregular Wars!!  I love this game.  It has so much variety.  I have a load of Ming Chinese to show off.  The first stand is a trained cavalry company.  Ming soldiers wore rawhide armor lacquered red or black. 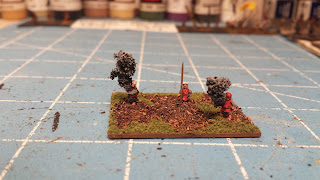 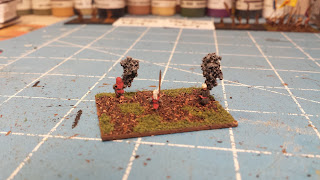 Here are some grenadiers with smoking grenades.  There is a spearman covering them in case they get rushed by suicidal Japanese. 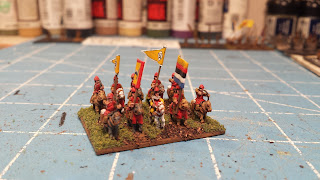 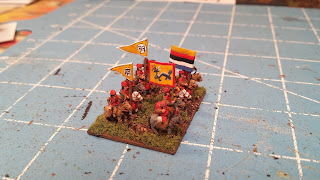 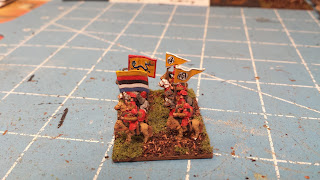 This is the General company based inside a trained cavalry stand.  The yellow triangular flags with the symbol is the official flag of the Ming Dynasty.  The striped flag symbolizes the extent of the control of the Ming..  Yellow stands for center and red, black, white and blue are the cardinal directions.  I am guessing Yellow is the Ming Dynasty and the four colors say it's control covers every direction as far as the eye can see.  The Yellow Dragon flag is a bit of a stretch.  It appears during the Qing Dynasty in the 18th or 19th century.  I included it to make the general's stand pop on the table.
My knowledge about the flags may be wrong.  If someone catches a mistake please let me know.  Chinese heraldry and flags are a hobby of mine. 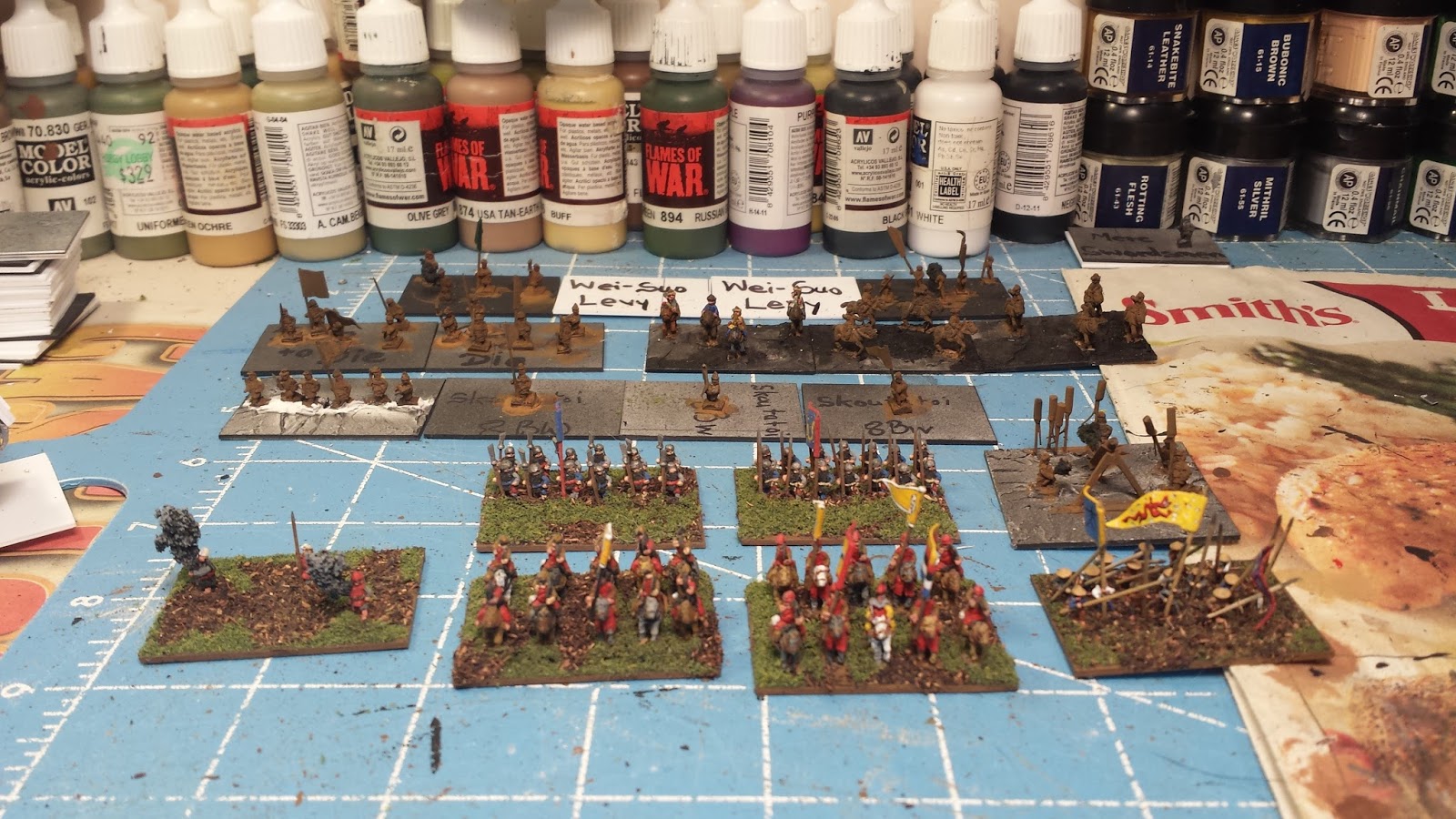 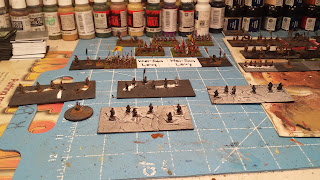 I have decided to start my Hostile Realms High Elf army.  These stands are the skirmishing archer elves and their commander.  I based them on 40mm by 80mm plasticard stands.  The smaller circular base is the section's commander. 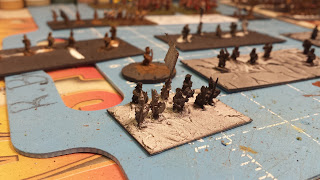 This stand is the hero stand.  He has a small escort, a banner and several musicians.  High Elves like to be noticed.  They are haughty after all. 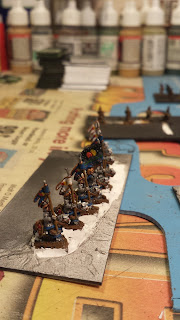 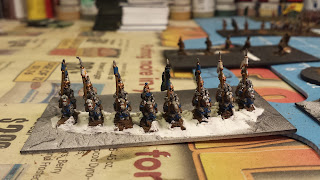 This stand is a High Elf Cavalry unit.  I need to add another row of eight warriors.  They are the Knights of the rising moons.  Every 100 years the twin moons overlap each other.  This is a sacred event for the High Elves as they worship the goddess "The Lady of the Full Moon".
I do not have names for all of these sacred events.  The High Elves are really into all things lunar.


I have been getting over what I think is food poisoning.  It is miserable and I would not wish it on an enemy.  I hope to get some more painting in soon.

Once I finish all of this I will have a lot of back log finished.  My long term goal is to complete my DbMM 2/5 Later Hoplite Greek force.
Posted by NerdWargamer at 10:36 AM No comments: