Somebody stole it, raced it and brought it back!!

I have been very busy for the last few months.  My wife and I have a new addition to the family. 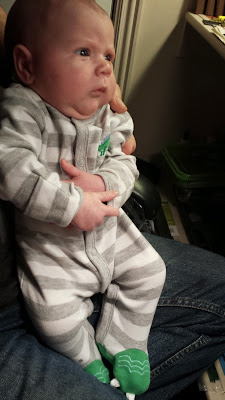 This little guy's name is Theodore.  He had some complications at birth.  After being in a NiCU for a few weeks he had some lung complications.  I am happy to say he is past all that and can breathe on his own.  One nice thing about having kids is that if you wait long enough you may have a dedicated wargaming partner and painter.
Since I am on display here I will share a few pictures of my daughter Madeline.  She will be 2 in October.  Madeline is all energy and is constantly on the move.  It is a surprise to me I have accomplished so much hobby wise while having a family.  My advice to you younger guys is that you do get some down time.  It is not a often as when you are single.  But I would rather have a family then being single.  I work my hobby time around my family.... it is not the other way. 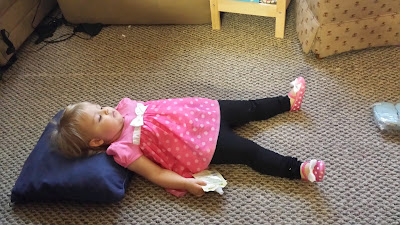 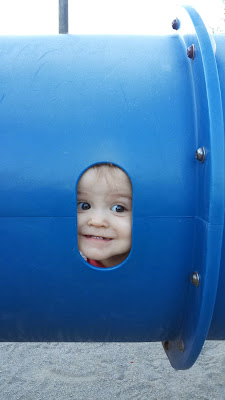 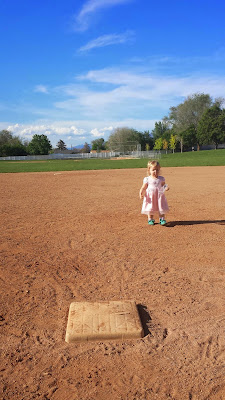 I have finally completed my DbA Athenian II/5 army.  It was a long time coming.  The first picture is what the Athenians get as a core.  There is a General Spear stand, 4 Sp stands, 1 Psiloi, 1 Light Horse and 1 Cavalry. 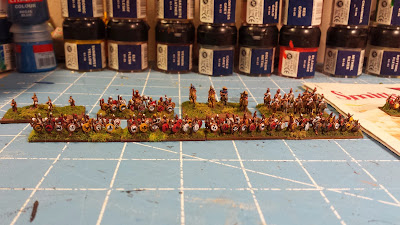 This photo shows what your options are for the force.  The first photo are the mandatory 8 stands.  Every Athenian army has those guys.  You get to choose between 3 Sp or 3 Ps and 1 Sp or 1 Ps.
I mixed up the 1 / 1 choice with some Peltasts.  The 3 Psiloi are supposed to be Athenian sailors wielding slings and javelins. 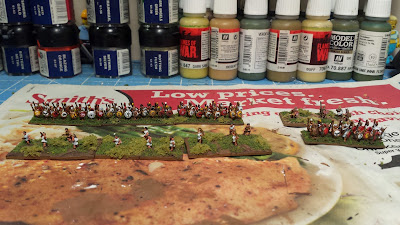 Here is one army option with lots of Spears and minor Psilio support. 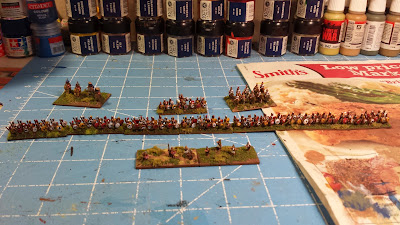 The next option has the minimum Spear units and lots and lots of Psiloi.  This is a great force for defending lots of difficult terrain. 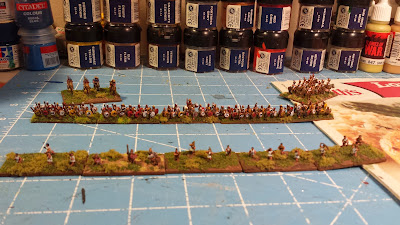 Here are the Athenian Cavalry.  I had much more fun painting this unit than I anticipated.  I used to try to paint 28mm cavalry and I hated it.  6mm is much more satisfying per time invested on the models. 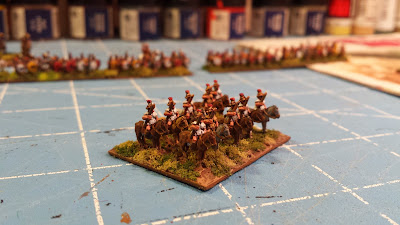 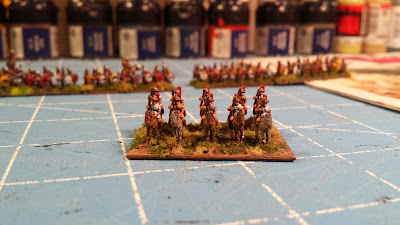 This last photo shows off some Thracian Peltasts being supported by Athenian horse.  I made the choice to not paint designs on their shields.  I felt like the army will lose some of it's character if every shield is an elaborate design.  These guys did not care about that.  I still need another 9 stands of these guys to complete the DbMM list.  I can always add more detailed shields. 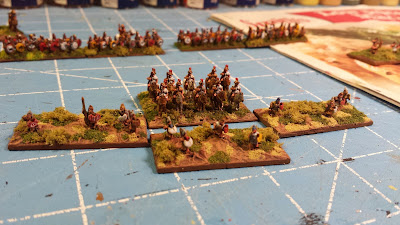 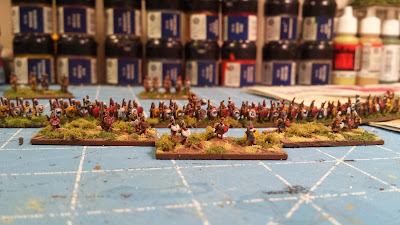 A friend of mine showed me how to make my own storage boxes from cardboard, foam and hot glue.  He used a white box used to hold magic the gathering cards.  They are very easy to make and very inexpensive too.  The foam gently grips the models and keeps them in place.  This design could survive any bump or impact. 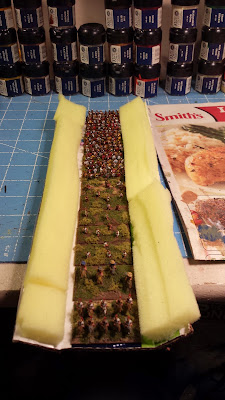 See how to foam grips the models and secures them.  My friend's design is great.  I will never have to spend 100s of dollars on foam army cases. 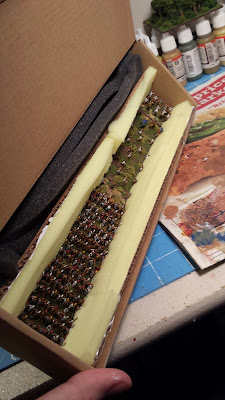 This box stores the entire army.  I wrote the army list info on the box for easy reference. 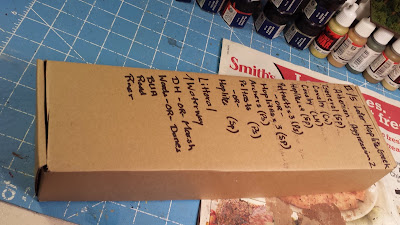 In other news I have also finished my Hordes of the Things army.  This borrows from the Greek Athenian army.  What you are looking at is quite a time sink. 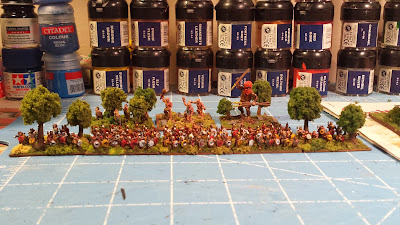 This is the sacred grove that serves as the stronghold for the Greek Heroic army.  Think of the old Fairy ponds from Zelda. 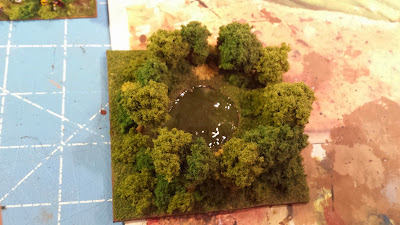 Here are the Cyclops that serve as a behemoth in the army.  They were recruited by Zeus on the grounds that they have to behave.  Any casualties or spoil are free game to them after the battle. 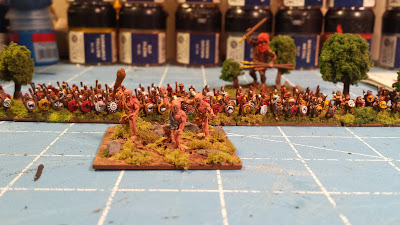 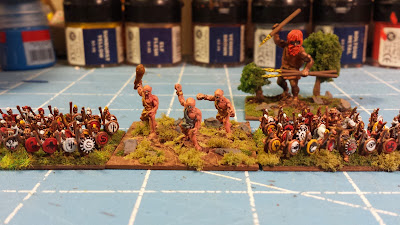 These models are from the 15mm Magister Militum fantasy range.  They are actually Ghouls.  I modified them slightly to make them more mono-eyed. 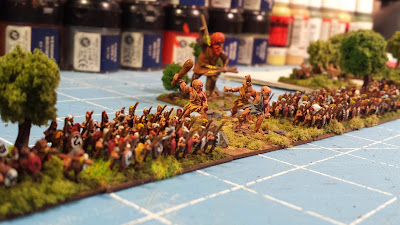 The last showcase is my slow project.  These stands are going to be in my King Triton HoTT army.  You have already seen Gary the Octopus.  I also have a Behemoth water elemental stand.  It is from MM's 15mm fantasy range.  The last stand is a scratch built Aerial / flyer stand.  It is a group of Tornadoes.  I cannot remember the ones that form over water.  King Triton has enlisted nature itself to wreck revenge on the surface dwellers.  This army is going to be mainly custom built stands.  So it naturally will have very slow progress.  It will have lots of angry crabs and lobsters.  I tried to think of other creatures that could attack up on land.  It was hard to come with other options outside of crustraceans.  If anyone has any ideas please let me know.  The theme here is that King Triton is pissed that surface dwellers keep polluting his oceans and depleting his seas of life.  He has decided to wage war on the ungrateful surface dregs who dared to defile his domain. 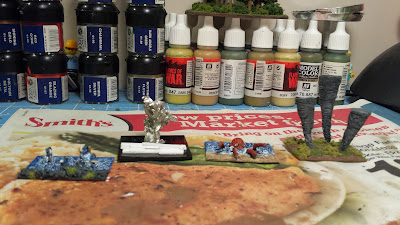 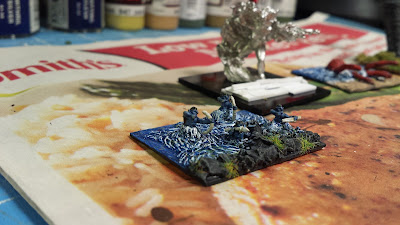 This stand is a Lurker / Water Lurker (depending on the amount of water terrain) of Mermen.  I am not sure how well this stands looks.  My Mermen were supposed to be a bit lighter shade of blue.  It does make sense that their skin gives a natural camo in the water.  Their bows and the one little guy with a javelin are made from whale bones.  Their culture is akin to Native Americans in that they do not carelessly kill or waste any creatures they hunt.  In this case one whale can make a lot of arms!!  Given that they cannot walk on land they are forced to lurk near shores.  If anyone is foolish enough to get within bow shot they will be dead.  The models are supposed to look like they have just popped out of the water and are about to let loose the first volley.  The water effects did not come out the way I wanted them to.
I would not go anywhere near the water if King Triton was waging an aquatic war against dry landers.  I must mention that King Triton has a bodyguard of Gillmen Blade stands.  I have not yet found a good model for them.  KT will be riding a massive war Lobster and is a Knight General in game terms.  I do have some bipedal aquatic invaders.  I did not want to over do it with gillmen because they are a treacherous lot and only agreed to help KT because of an ancient agreement made centuries ago.  King Triton does not want to many of the gillmen as they may turn on him after the fighting is over. 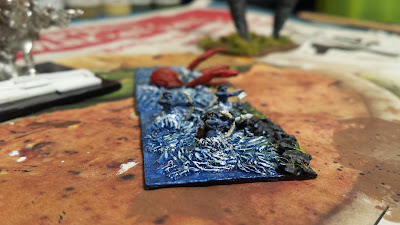 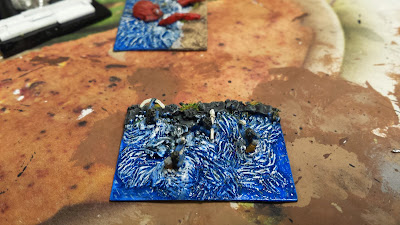 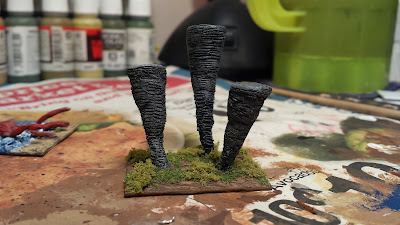 I have my next two mini projects on the board.  The first one is some baggage stands for the Athenian force and the Thessalian force.  I am also going to make another Cavaly stand to replace the current Athenian Cavalry stand.  My DbMM army has 6 Reg Cv I.  I have decided to use the more lightly armed Thracian horsemen instead of the other guys (the ones pictured above). 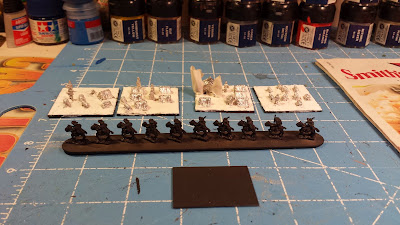 The next project is the other half of my Greek army pack.  This is the Thessalian army for DbA.  The blank stand is going to be replaced by the Athenian Cavalry stand.  The Thessalians get a Cavalry general.  This picture has the entire force pictured along with the baggage for defensive games.  Once that is finished I can start warring for Greece with all painted forces.  I am excited. 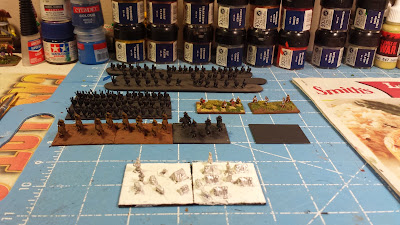