I really find the Taiping Rebellion an interesting period of history.  This war occurred after the Opium Wars.  England went to war with China to ensure that the Chinese stayed addicted to Opium.  The Chinese government realized that England was doing that and tried to resist.  It ended very badly and caused unrest amongst the local peoples.  In 1846 a man by the name of Hung Hsiu-ch'uan claimed to be the younger son of Jesus.  He started writing and speaking about his visions and God's plan for China.  In 1850 his followers started fighting with the Imperial forces.  By the time to war ended 1866 it was estimated that 20-40 million people had died.  If this is true the Taiping Rebellion was second most bloodiest war being beaten by WW2.

I find this period interesting due to the unique weaponry and tactics involved.  There are masses of unruly Chinese mobs clashing wielding old rusty swords and spears.  There are black powder weapons that were antiques to the critical Western eyes of the time.  The British sponsored a mercenary company called the Ever Victorious Army.  It was led by an American until his death and then a Englishman by the name of Gordon.  This unit was trained in the Western way of fighting.  It did not always live up to it's name but the unit was generally successful.  The Imperialists and the Taiping forces gave no quarter to the enemy.  There is a lot of colorful uniforms and the Chinese love flags.  It allows for some great modelling opportunities.  Since this is a period that is not gamed very often I will have many opportunities to convert existing models.  And I have already started this. 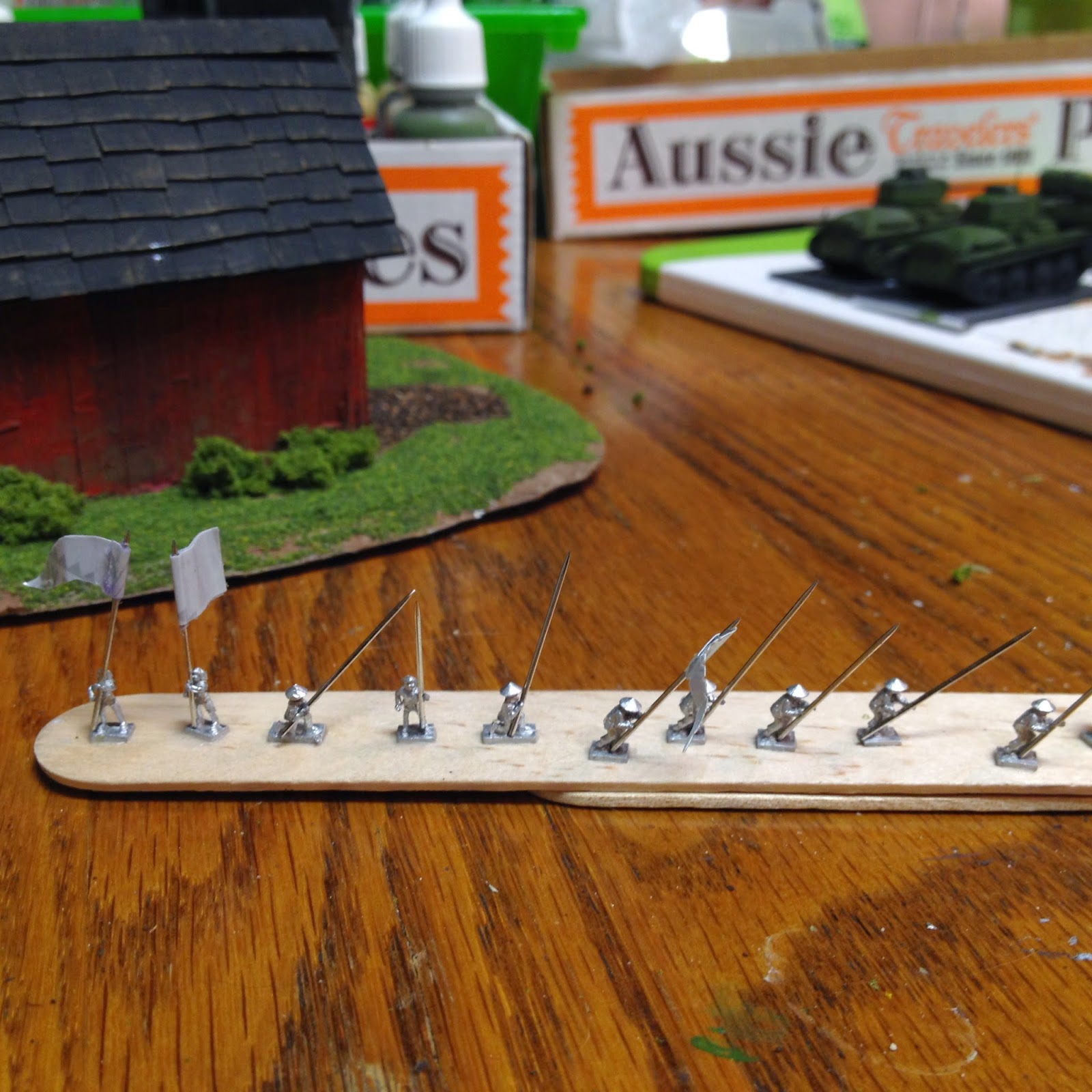 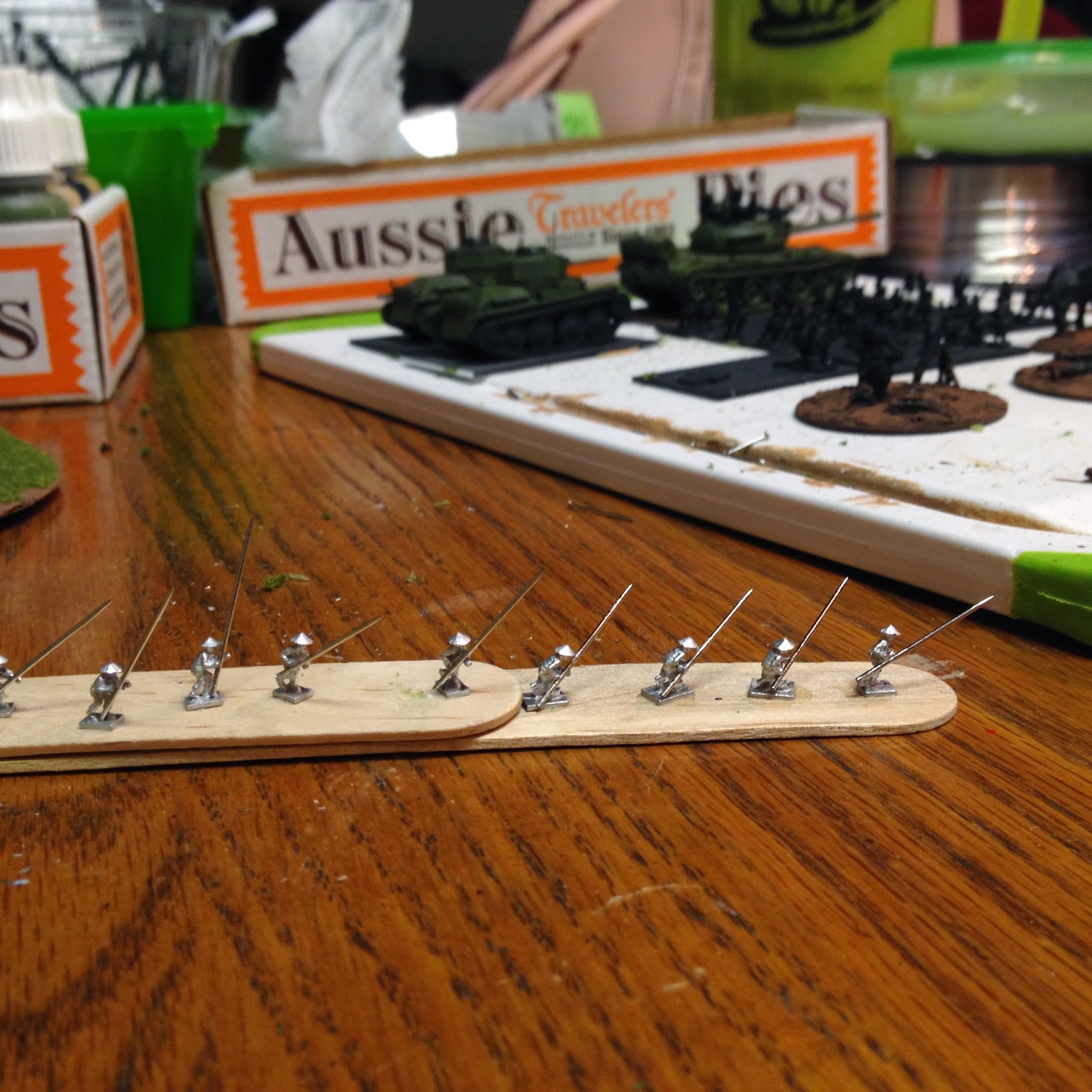 Here is my first attempt at Taiping Infantry.  These are my T'uan-Lien soldiers.  They are common farmer militia.  My osprey book says that the soldiers wore coolie hats in the summer.  These are Vietnamese style coolie hats.  That detail will be really hard to pick out at 6mm.  I want to use Japanese Ashigaru for C'hin Dynasty troops.  They look very similar to the terracotta men that were from that period.  6mm is a great scale for conversions because some details can be covered or obscured.  That means more creativity for me!!!
I used GhQ's Viet Cong individual infantry.  I trimmed away the ak47's and the m16's (What?  Yeah, some of the guys had m16s) and the grenades from the soldier's belts.  It was a little tricky to do some of soldier's arms.  I believe that as I keep doing this I will find more creative ways to make the guys hold the spears.
For the spears I clipped a straight pin down to spear size and glued it onto the model.  I wanted to add some Ji style halberds but it was to hard to do with super glue.  That will have to wait until I get a sauder gun.  This unit has three flags.  One will be a dragon banner, another will be the leader's banner and a third one is there to round out the flags.  I just primed the models.  I look forward to painting them! 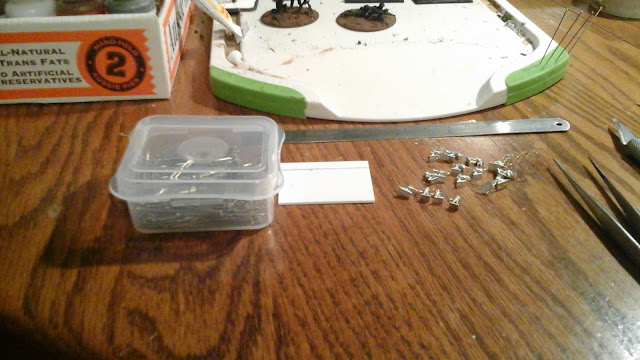 Posted by NerdWargamer at 11:52 PM No comments:

Dorothy's House....no curled up socks to be found!!

I have a lot of stuff to cover today.  I want to start with my 15mm terrain projects.  These two pieces sat around for a few months unfinished.  Nothing annoys me more than partially completed projects.  It seems lazy and impulsive to dive into an idea without completing it.  This first picture is my pig pen.  Wait a minute.  I am getting a head of myself.  I need to give credit to matakishi's teahouse.
http://www.matakishi.com/
He is strictly a 28mm man.  I took some of his stuff and converted it down to 15mm.  I also used a different medium for creating the pieces.  I believe it is unique enough that I am not copying him.  The first set of pictures are of my pig pen.  I do not have any pigs to put in the pen.  I guess the rebels have taken all the livestock away on previous raids.  I will be using this for my pseudo African conflicts.  If you look in the back ground you can see some other 15's and some of the colonial governments tanks.  I will do more with that in another post. 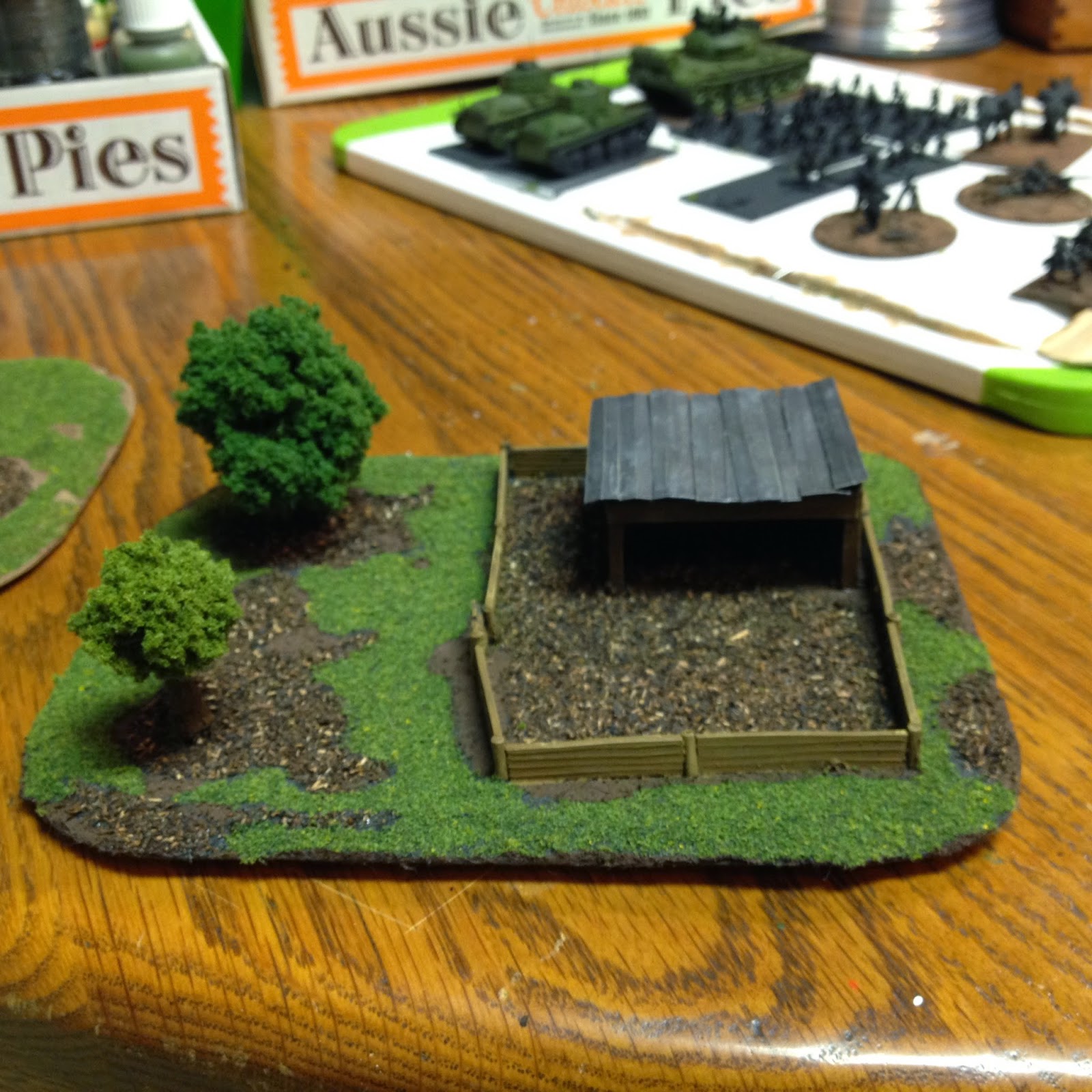 This is the barn house.  You can see the outhouse in the back where the colonial farmer drops deuces.  You may be wondering why I have American style buildings in Africa.  Well, I changed theaters after I made this stuff.  My colonial farmer studied in the US in college.  He was so struck by the rustic qualities of the South that when he got home he built a farm based on of that influence. 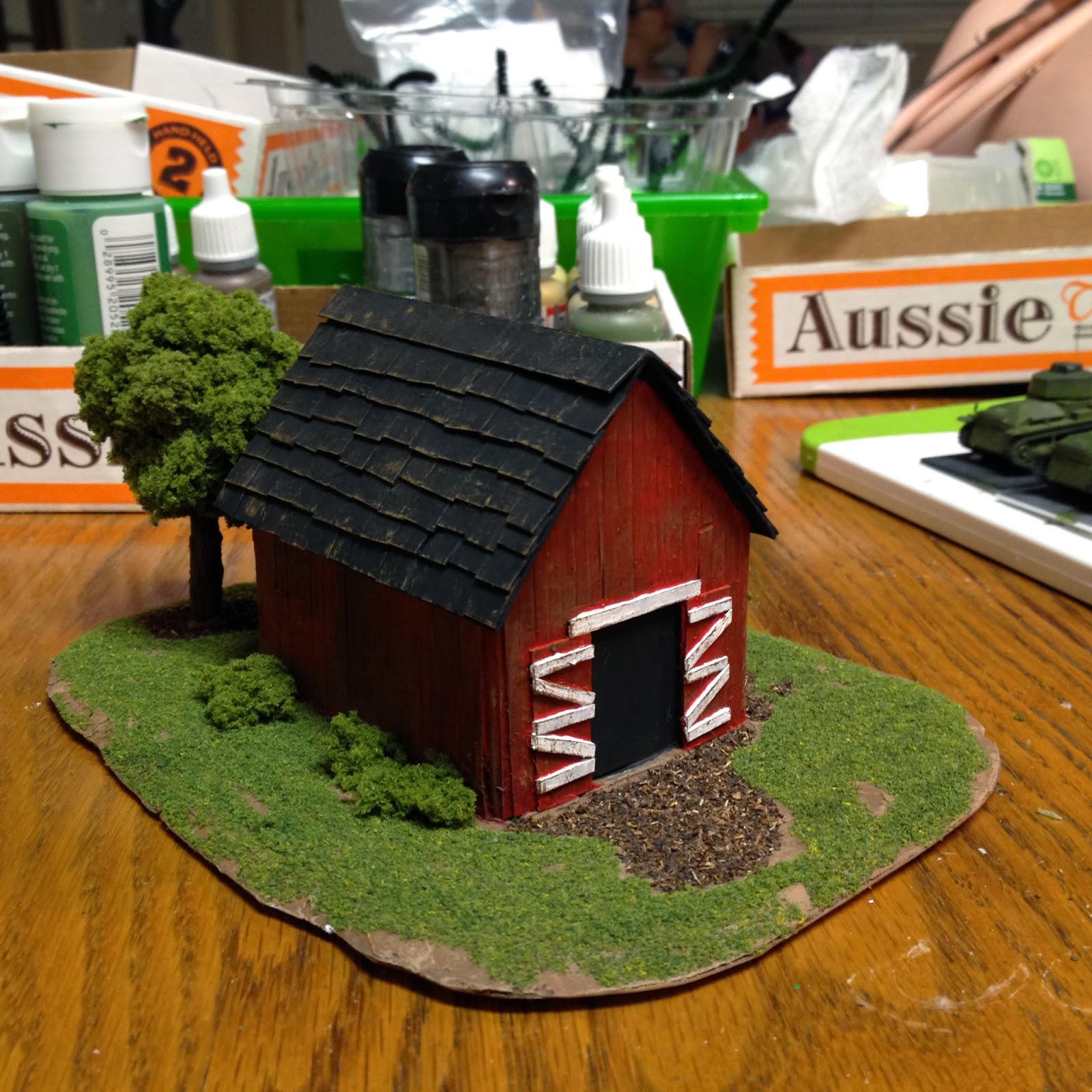 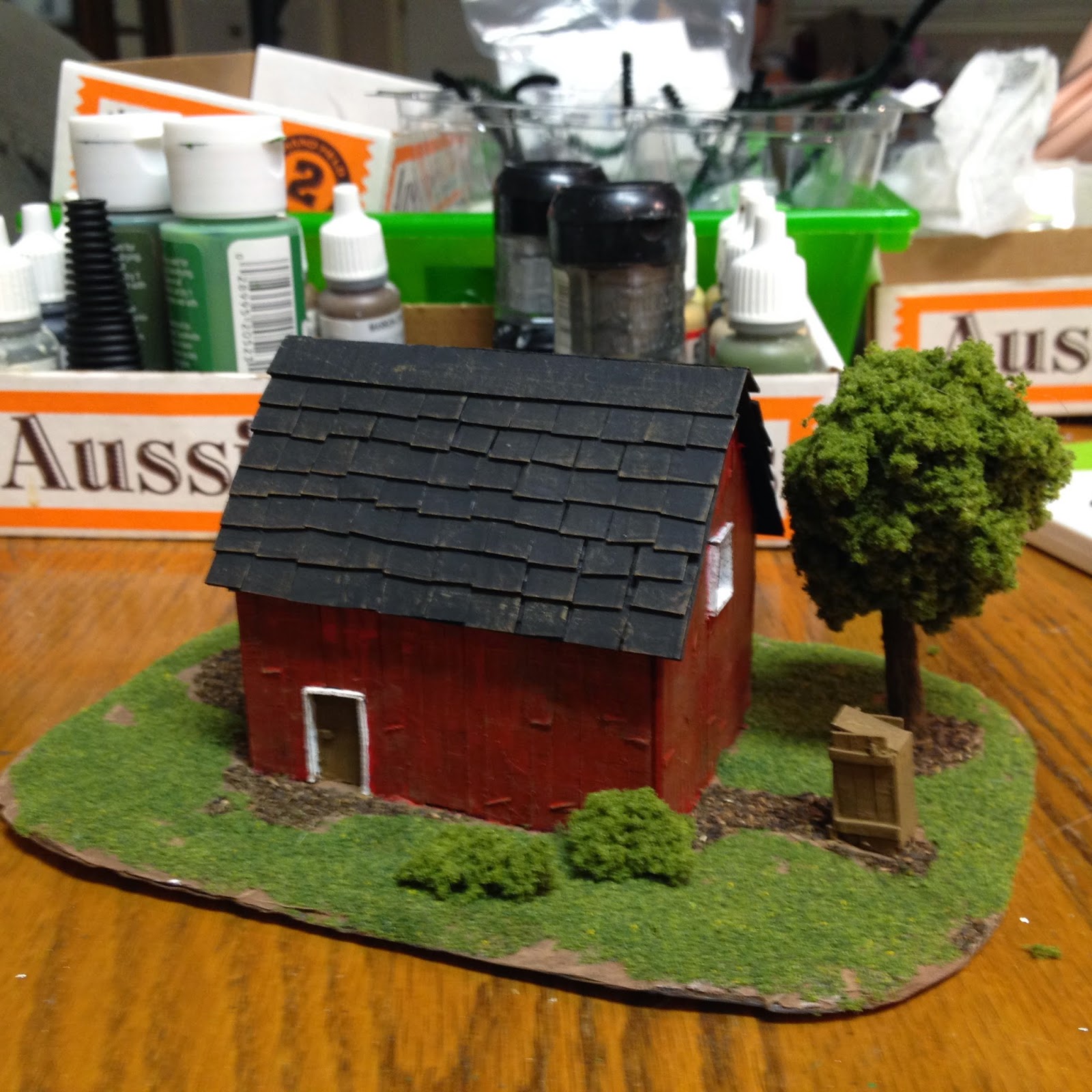 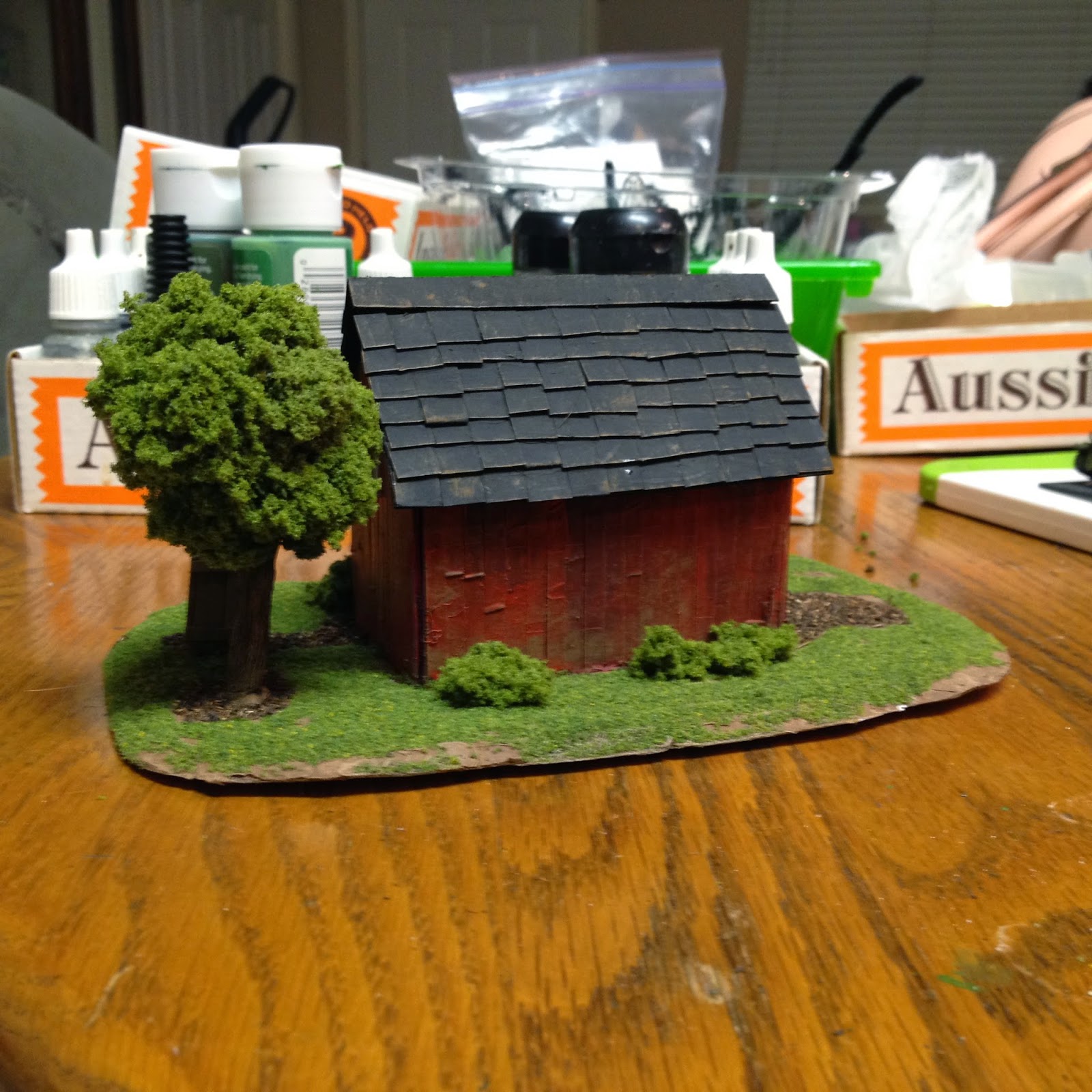 The next bit on the list.  I wanted to make some unique suppression markers for Spearhead.  When a unit is fired upon there is a chance for three things to occur.  It can be one of three things.  It could be nothing, a suppression or the destruction of the platoon's combat ability.  If a unit is suppressed you have to mark the unit.  This will cause to unit be unable to move or return fire until it rallies.  I made a bunch of explosion markers using circle bases, wire and tree flock.  I sprayed painted it black and then painted them to look like big explosions.  I am wary that the suppression markers are a little on the big side for 3mm.  The next few sets I make will be smaller in size.  I think these will be big 155 artillery barrages. 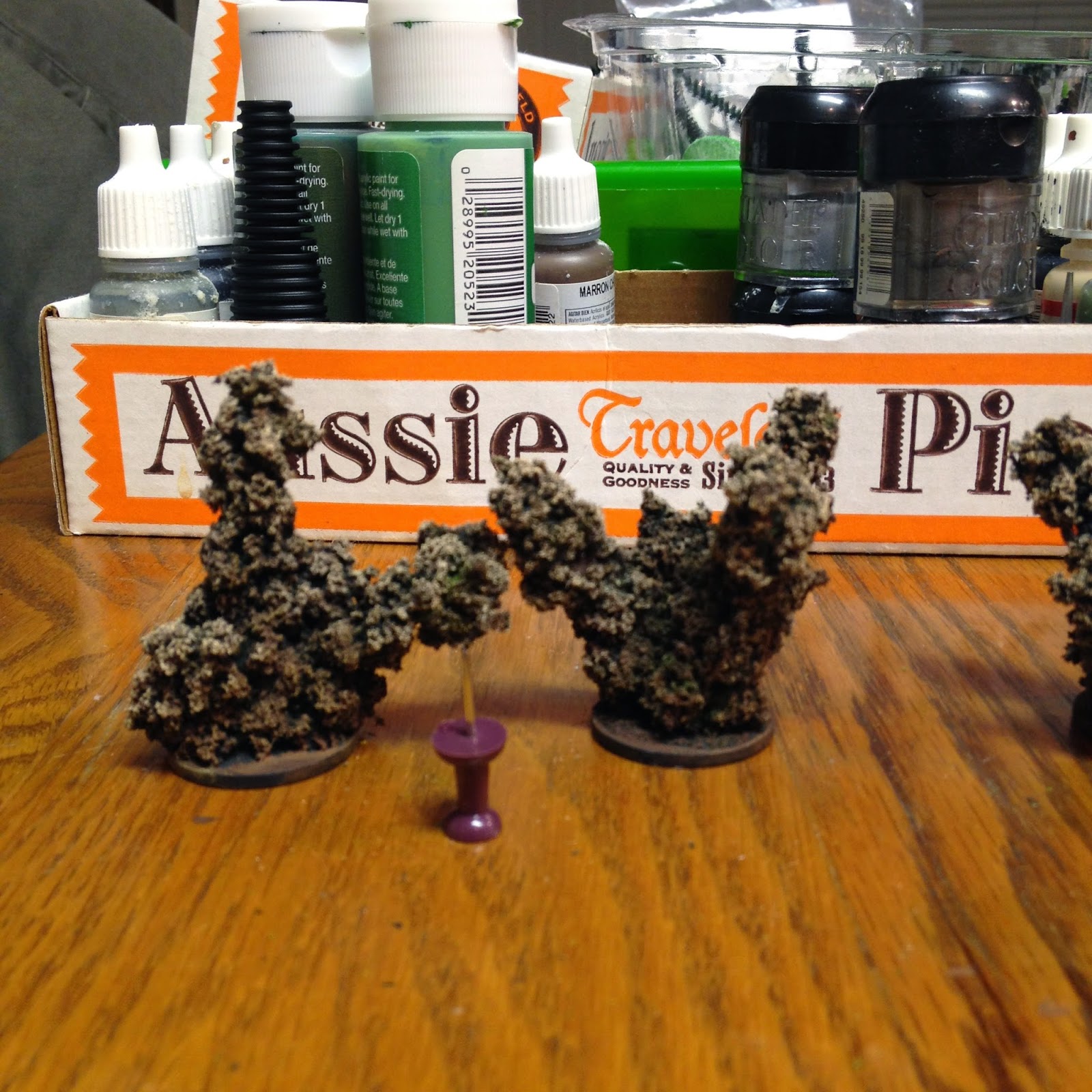 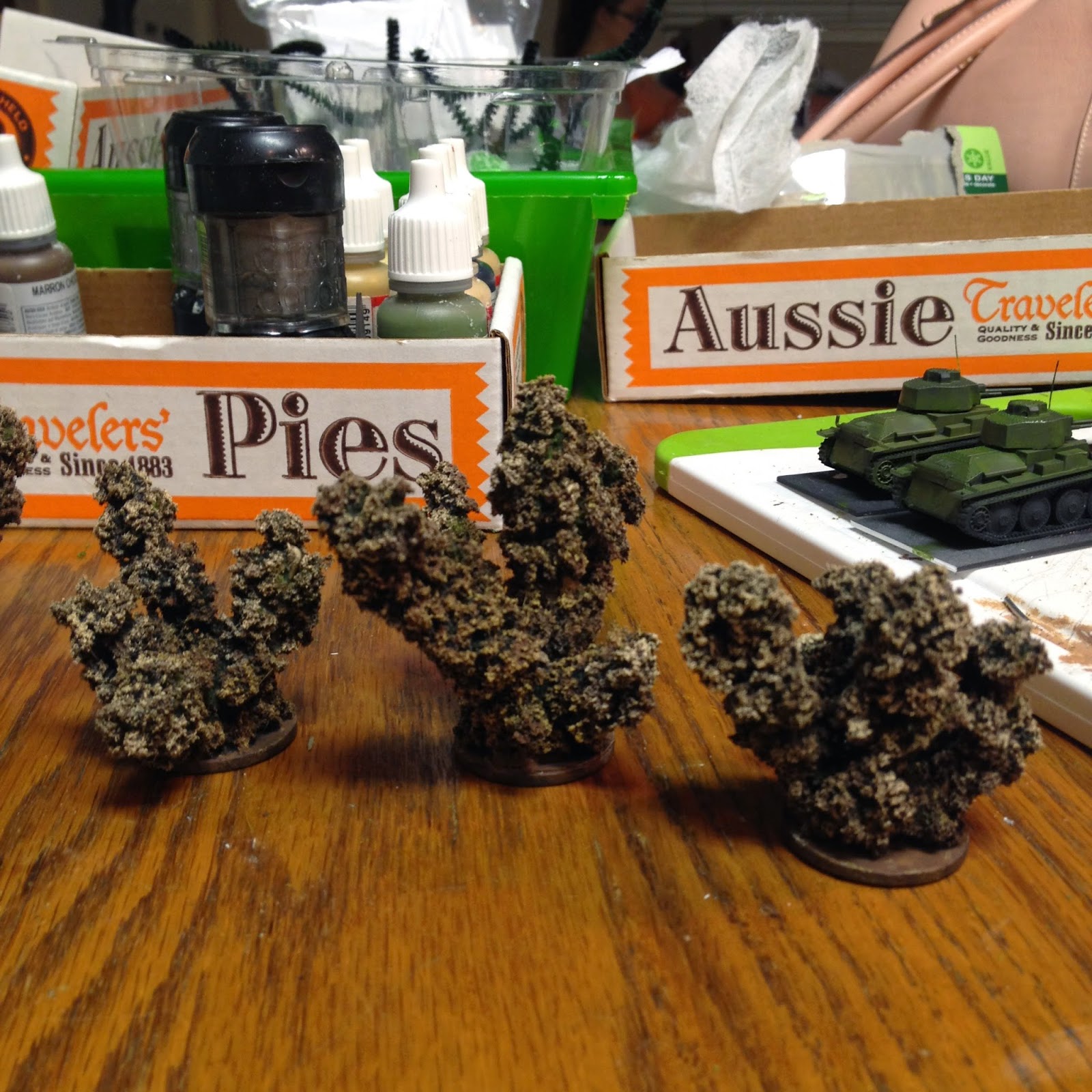 My next thing is a very tiny side project.  I have some 1/6000 scale ww2 warships.  I love all things Italian about WW2.  The battle of Cape Spada is a small cruiser clash that occurred in the Mediterranean.  Two Italian light cruisers (Bartolomeo Colleoni and the Giovanni dalle Bande Nere) were chasing 5 British H class destroyers.  The destroyers lured the two cruisers into the range of the HmAS Sydney and a destroyer.  When the smoke cleared the Colleoni was sunk and the Bande Nere withdrew to safer waters.  I went out and picked up the ships for less than $20.  I am going to use the free rules Seekreig 4 to play the engagement.  Here is the scenario if you are interested in reading more http://www.ghqmodels.com/pdf/wwii_micronauts_scenarios/2.pdf.
At some point I would like to own the entire Italian navy.  It was on the smaller side in terms of numbers.  These ships paint up extremely fast.  If you look at the Sydney you may be able to see the naval camo on the hull.  The two Italian cruisers are in the last picture.  Italian ships were interesting with their top deck recognition.  I usually do not like to show models that are half painted.  People want to see painted models and not primed stuff.  I am moving this up the list for painting because it is a small side project.  I also plan on doing the Battle of River Plate.  It is a engagement of the German pocket battleship Graf Spee against 3 British cruisers. 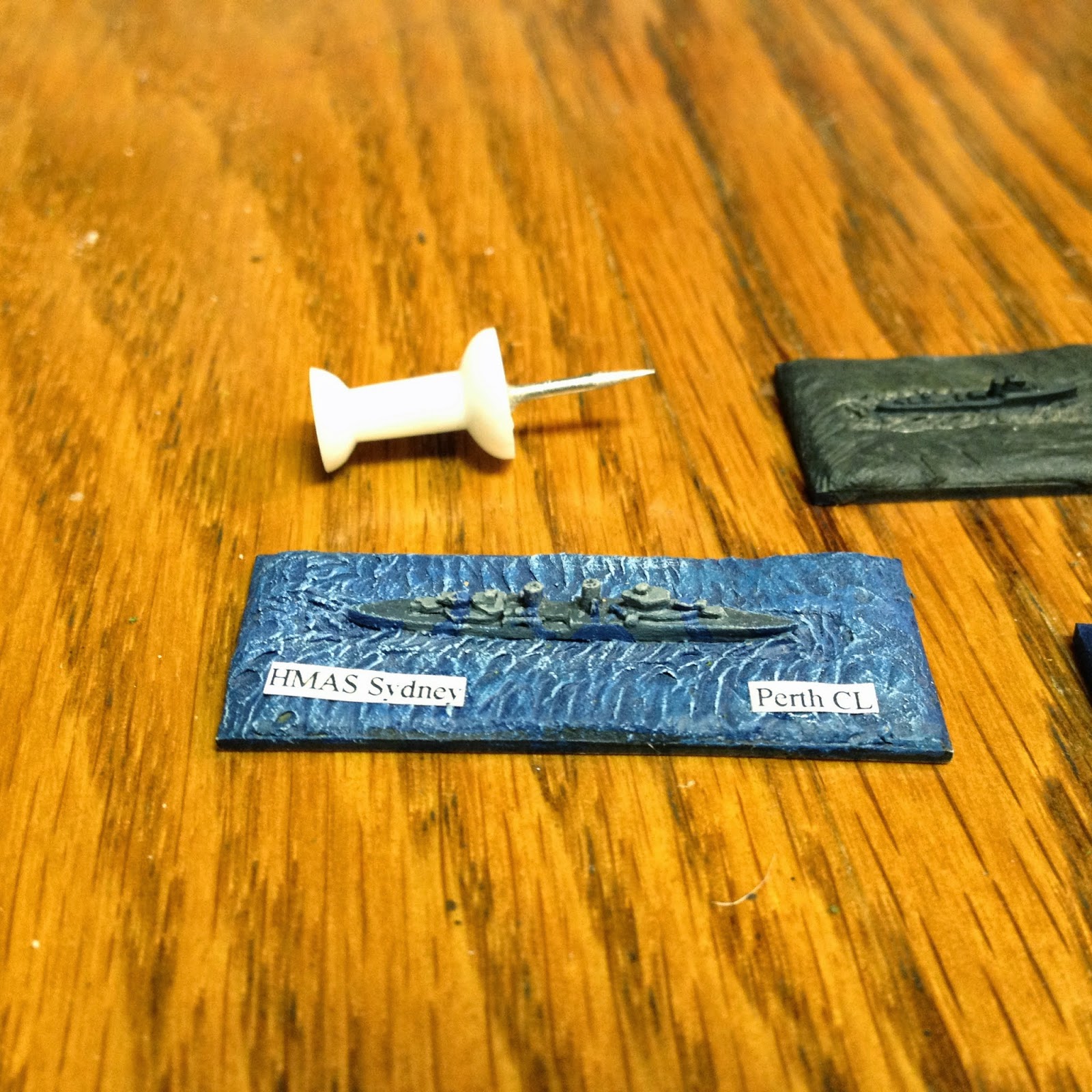 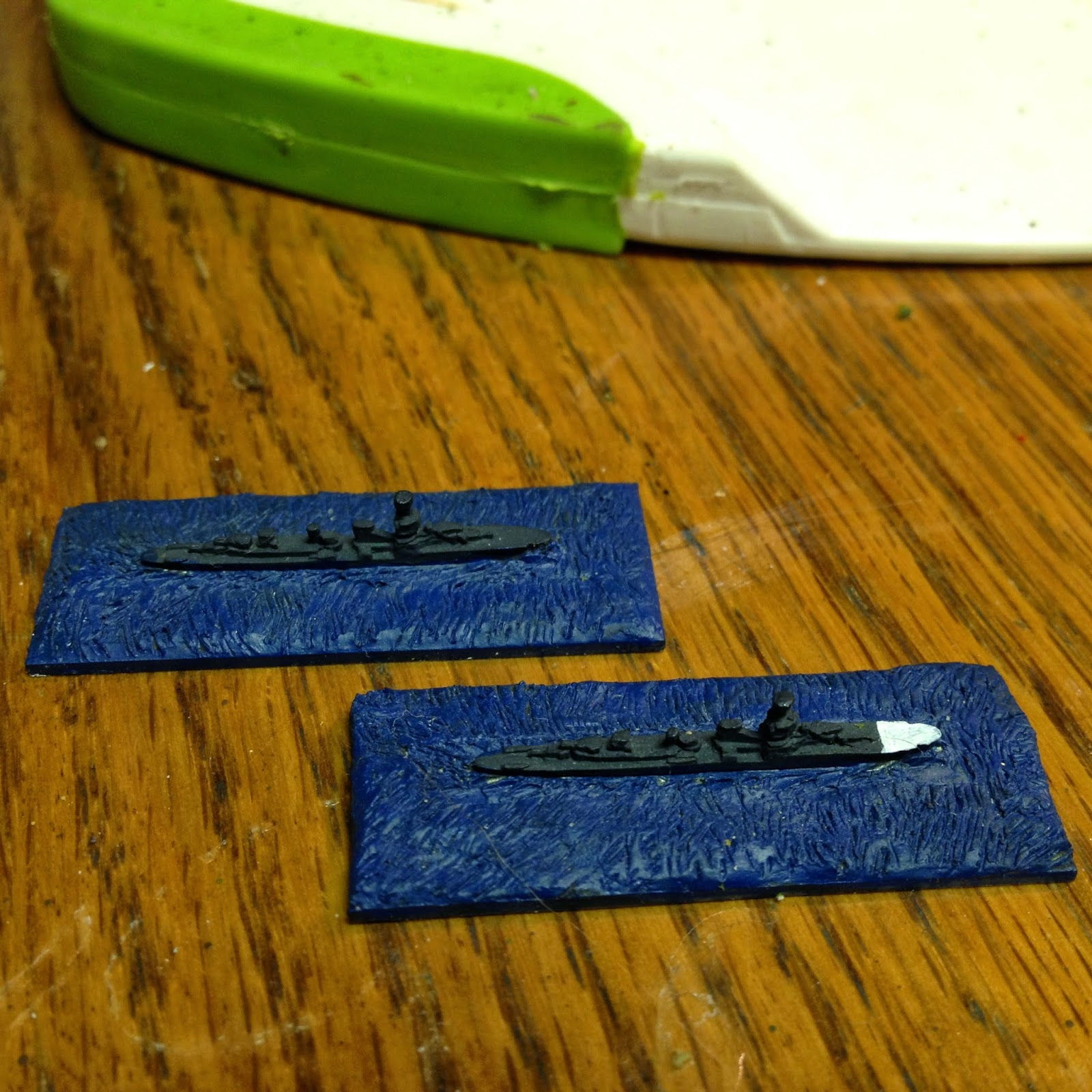 This class of Italian light cruiser is called the Condoterri II.  There were 4 ships in the class.  The ship model had 4 series.  Each series were slightly different from each other.  In terms of guns they had 6 6" guns and 4 4" secondary AA guns.  These ships were fairly fast but were severely under armored.  I think the Italians based their ship designs on the premise that they would be attacking the French.  It would be neat to do a few hypothetical battles with French and Italian ships.

I have also started painting my DbA Athenian Hoplite force.  I am really happy to be getting started on that.  Stay posted for more news next week.
Posted by NerdWargamer at 11:23 PM No comments:

I have the start of two of my projects here. 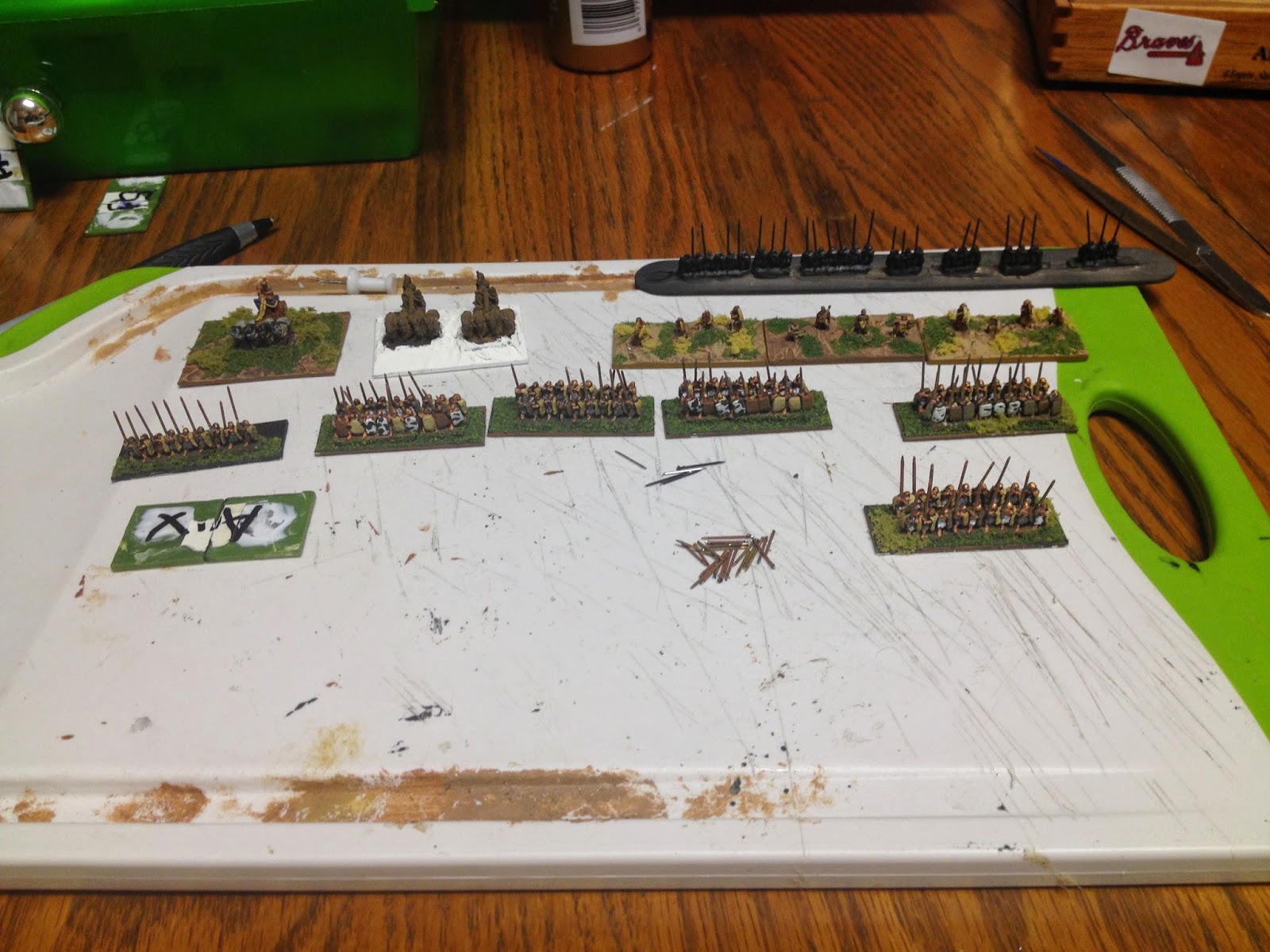 The Sumerians were painted earlier in 2014.  The pikemen's spears were clipped off and replaced with cut down straight pins.  I used a thumb tack and poked a hole in the hands of the models.  I then stuck the pin into the hole and used super glue to hold it in place.

After the accident the pikemen had some of their spears knocked loose.  As you can see in the photo about half of the spears survived the collisions.  That proves to me the technique is pretty durable.  Notice the loose spear bits in the middle of the cutting board.  The models are Irregular miniatures.  I am missing the blade unit that the DbA 3.2 list requires.  That will have to happen in a later miniature purchase.  I will do either Assyrian Auxilia with spears or Hebrew Light/Medium Spearmen from Irregular. 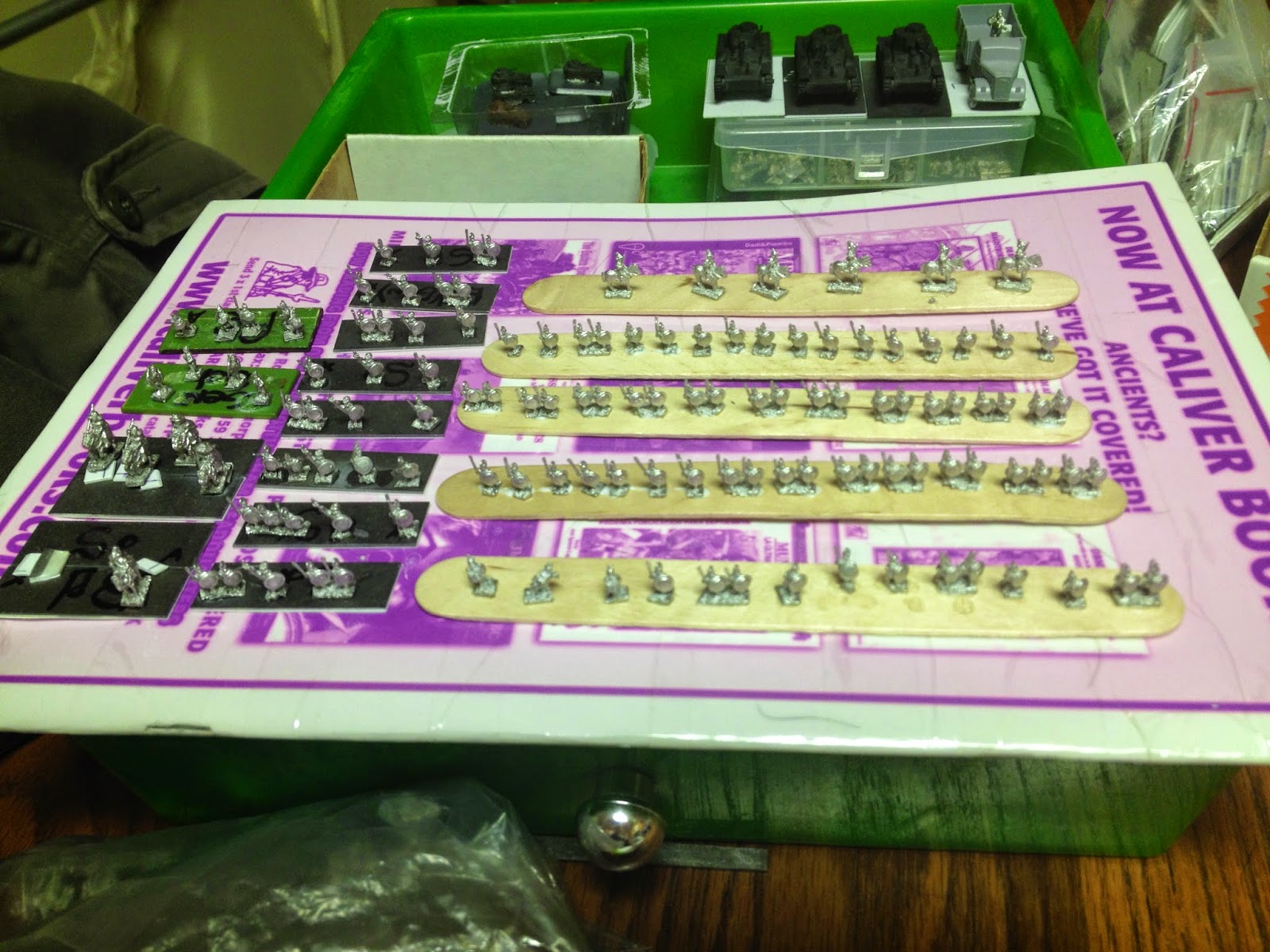 Here is my Athenian force.  It is ready to be primed and painted and flocked!  I used Baccus 6mm Greeks for this.  I bought a Greek army pack for $40.  The pack will give me this Athenian army AND a Thessalian force.  That book the models are resting on is the DbMM army book #2.

I clipped the 4 man strips that Baccus casts their models on to make the Irregular spear units that are listed in the army book.  You can see the thin metal bases with a few figures glued to it.  I always put a few figures onto the base and the rest of them are on wooden sticks.  After everything is painted I will glue the hoplites to the bases.  I like DbA as it gives you a little taste of an army without breaking the bank.  The other nice thing is that I have a decent start on a Later Greek Hoplite Athenian (or Thessalian) army.
Posted by NerdWargamer at 4:40 PM No comments:

I am still recovering from the car accident we suffered from in December.  I have made some more solid wargaming plans.

I am doing Spearhead WW2 in 3mm.  My addiction for 1:1 scale wargaming has taken over.
Speaking of that I decided to do 6mm WW2 with the Schwere Kompas set of rules.  The designer is a nice guy.  I am modding the rules so that each base is a team and the teams link up to for a squad.  The rules usually call for a stand to be a squad.  One inch is 100 yards in the game.  I want to make it 3 inches for 100 yards.  The focus is much more of a platoon scale than the company level.

DbA is still the same.  I have my Greeks and my Sumerians need their spears re-pinned.

I have a little set of modern rules called no end in sight.  I am going to do individually based 15mm models.  My theater is a pseudo African country at some point in the 60s or 70s.  I am taking a lot of artistic licensing with my unit choices.  I am excited to see how it all turns out. The rules are great too.  Check them out at wargames vault.

And finally my last project is historical in nature.  It is the taiping rebellion that took place from 1851-1866.  I am still in the research phase because I know nothing about Chinese history.  I could go into more detail but I will refrain.  It is very interesting.  I will say that most of the armies involved used hand weapons and a smattering of old Matchlocks.   compare this to the civil war going on in North America at the same time.

Here are my painting goals for 2015 in order of priority:

3mm Russian early war (this should be fast as 3mm paints quickly. It is really the basing that is time consuming).

I will try to post at least every other week with updates.

PS  I am not paid to plug any of these games.  I just like them!


Posted by NerdWargamer at 12:47 PM No comments: