And now for something completely different...

Hello folks.  It has been a while since my last entry.  I have been super busy with the job and the wife and the pooper.  This Saturday and Sunday have been slow and consequently I have been able to paint.

I have settled on three main projects for the next few months.  Money is tight and I am unable to buy anything new.  That is actually a good thing b/c I hate accumulating new things and never painting it.  It is very easy to get into that habit of running off after that shiny new thing and never finishing what you start.  So after a spirited question and answer phase I decided to show some maturity.  Erm...sort of.

I was working on my Germans for the past few weeks.  I decided to take a break from that and work on something new.  Well, it is not new to me because I have owned these models for quite a while.  What was one project has become three projects.  I am not sure how that happened but there are people working on it.  I decided to pull my Wargames Factory Numidians out of the Spiderman lunchbox!  And the 6mm DaK infantry came with them!!  Oh, there are some German Barbarians I converted from WgF Saxon infantry too.  I have no plans for them b/c they still need big, bushy beards sculpted on them.  You cannot have barbarians without lots of hair. 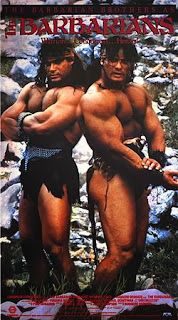 These guys are not Barbarians.  I remember reading those 2nd edition AD&D manuals.  Everything was backwards.  The wizards were old, hairy hermits with beards they have been growing for twenty years.  And all the barbarians were smooth skinned and clean shaven dudes in furry sling shot briefs!!  By the way I loved that movie as a kid.  My cousin and I used to watch in constantly.  They do not make movies that way anymore.  No one would CG the buffalo shots like the ones in this goofy movie.  If an emerald fits in your navel you get to be queen!  What a concept.

I digress...I am painting some new guys for the moment. 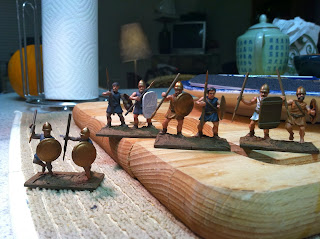 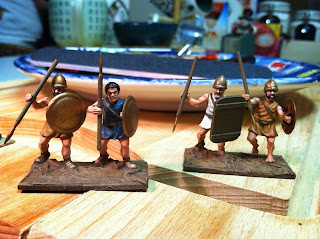 These guys are from Wargames Factory's Roman line.  They are supposed to be Numidian light infantry.  If i remember correctly they are advertised as being converted into dozens of different historic ancient era soldiers.  The only limit is your patience with sculpting.  I have decided to use them as either Sea Peoples Soldiers or Persian Greek levy infantry.  On the latter half I see them as Ilyrians or very poor Greek farmers.  The Persians come through and they capitulate to them.  It works for me as the Persians had subject soldiers from multiple countries.  I balk at the fact that my knowledge comes from wargaming rules and not a historical book.  Oh well, this is all fantasy anyways.  In addition to these 8 guys I have another group of primed soldiers on 40mm x 40mm bases ready to be painted.  These guys on the 1x2 stands are the back rank.

I am not quite sure what rules to use with them.  I am trying to keep game rules down to three basic categories.  These are one (count 'em, ONE) historical set, one fantasy set and one sci fi set.  The good news is that my sci fi choice is Epic Armageddon.  They are a free download on the Games Workshop website.  You can also find all sorts of great army lists here  www.net-epicarmageddon.org .
The one difference is that I choose to use miniatures other than GW approved minis.  There are great 6mm models out there that are a fraction of the cost of the GW ones.  This means I also have to change the names of units, etc.  I have a whole backstory to support a non-40K world.

That is all for this week.  I hope to get some more painting finished in time for Turkey Day.

Posted by NerdWargamer at 6:55 PM No comments:

Painting on the Eastern Front

Since this is a new blog thing I suppose it is only proper to insert some of my life's goings on.  My wife and I had a beautiful little girl named Madeline Leilu Brow on October 9th, 2013.  So my pursuit of my hobby and gaming is balanced by well, life.  That is a good thing.  To much of something tends to make it not be as special.  I mainly get to do some painting on the weekends.

I have been working on scratch built trees and painting my Blitzkreig era German soldiers.  What I usually do when I work on models is paint up a batch of models.  While things are drying or I need a short mental break I work on a piece of terrain.  This breaks up the work into smaller bite sized chunks.  I do not know, maybe I have AdD.  I also listen to NetFlix or Mystery Science Theater on the tube of U's.

My movie perusal list included:
Donnie Darko (we have a bunny in our house.  It looks and talks exactly like the bunny in this movie.  I do not hallucinate though).
Revolution (This is not a movie.  I have a healthy diet of roughage and Sci Fi).
Phase 7 (an odd foreign film about a epidemic and the survivors.  It was really good.  I recommend it). 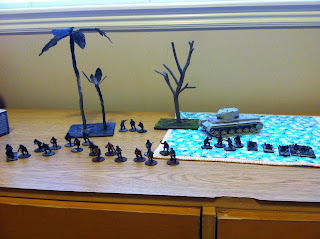 This is my main project for the next few months.  There is a KV-1 (1942) tank, the German infantry platoon and the scratch built trees.  The KV-1 is a Hobby Boss 1/48 scale model.  I cannot abide the 1/56 Warlord games vehicles.  The infantry is huge next to the tanks.  I will rant erm... post more on that later. 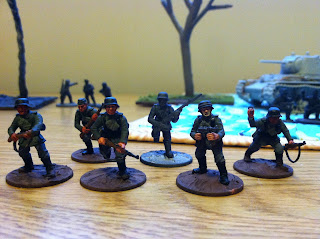 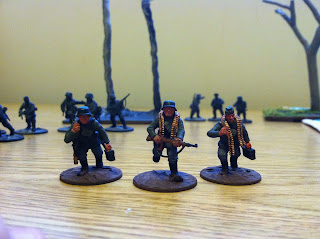 This is the first squad.  I have changed my painting strategy as of late.  I used to paint on model at a time.  My usual painting affair with 28's was Warmachine.  Most of the models in that game are individual character models.  It worked to give all my attention to one model.  It took alot of work but I am now trying to paint all the base coats up front and then focus on one part of all the models at a time.  I still have a few base coats to paint.  You should always paint from the deepest recesses out when painting.  This means I will do the skin of all the guys and then the uniforms, etc.  I did one model's skin.  The guy with the MP40 is finished.  You may be able to see his five o'clock shadow and eyes.  The three guys advancing are the mg34 squad.  You may notice an absence of the mg34.  That is b/c a hourglass eyed orange monster decided to bat the poor guy around.  I doubt many German soldiers signed up for that!  The gun barrel broke off and I have no idea where it went.  Another mg34 is being primed and re-attached.  That is a bummer b/c that model is one of my favorites. 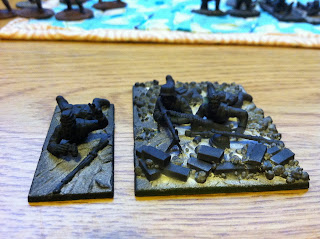 These photos are the MG34 teams.  I am really excited to see how the prone team turns out.  I try to tell a story with every model I paint. 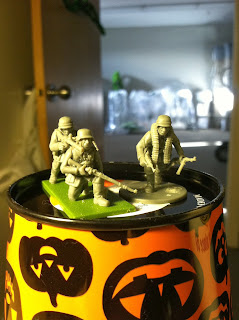 These guys on the pumpkin cup have been primed.  I modeled them after photos I have seen of German soldiers firing the weapon over the shoulder.  It seems impractical to me.  The weapon is probably not ranged for accurate firing since they are not at a fixed position.  Maybe these guys are so good with guessing range by feel they were effective.  Or they could be blasting at a bunch of fleeing soldiers.  (I am not a thrill seeker with the horrors of warfare.  I am only wondering at when this firing position was ever used).  It occurs to me that this position could just be poses for photographers behind the lines.  I added a caption to capture the feel.

The last model photo is the command squad.  This may not be a full sized command platoon.  I do plan on adding some more guys into the squad if they require it.  Keep in mind that no army is ever at full strength.  My tank platoon had cooks and support guys attached to get up to 16 men (full strength) for Kosovo.  I do not think we had a full platoon with the extras. 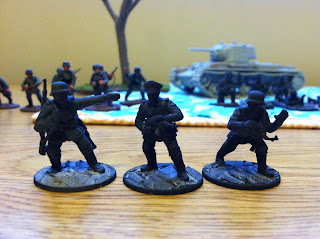 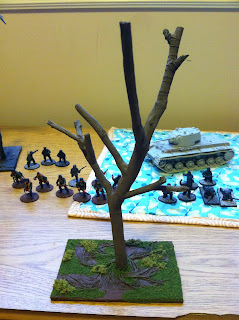 This is a scratch built tree.  I got the idea from another blog = http://mdarrow.blogspot.com/
He does some really great terrain.  If I have not already mentioned it I have an all consuming passion for making great terrain (as cheaply as possible).  I will post some pics of my 3mm terrain and models next week. 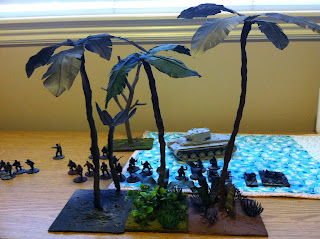 Finally we come to my scratch built palm trees.  I also plan to venture into wargaming in the pacific.  As of yet I do not own and Japanese or US Army guys.  I will eventually.  One of these days I will do a tutorial on how I built these trees.  It is pretty simple and someone with rudimentary skill could make great trees.

That is it for today.  I will keep posting photos of my progress.  I hope you enjoyed looking at my work.
Posted by NerdWargamer at 2:57 PM No comments:

This is my initial entry.  My blog is all about miniature wargaming.  The periods of interest that I enjoy are WW2 and the American War of Independence.  I try to keep my gaming to as few periods as possible.

I play Iron Ivan WW2 Skirmish rules with 28mm models from WarLord Games.  I also use 3mm Pico Miniatures for Spearhead WW2 rules.  And finally I am also starting to game the AwI with Perry models (28mm).

I will start posting photos of stuff I am working on.  I am currently painting up a platoon of 28mm Blitzkreig era German soldiers.  I also have a KV-1 tank that needs to be primed.

There will be more to come in the future.  I want to have some bits on my painting process.  My other gaming interest is making cheap and very good looking terrain.  28mm stuff is still a little trying for me.  My big thing at the moment is making realistic 28mm trees.