I need this brain for secret, undercover, aquatic training.

I have been away for some time.  Doing this every week is fun but life can get busy.  In the time since my post I have been really busy.  I moved my painting and hobby table into a small laundry room area.  During this transition I rearranged the entire area to be what you see in this photo.  I will put up some pics of the entire area some other time.  This setup gives me 300% more room than I had before.  Instead of two lamps I have three lamps.  You need a lot of light when you paint.  I really love my setup.  Notice the top center of the picture.  My Samsung tablet is mounted on two thumbtacks.  I like to listen to youtube videos while I work.
This new setup is awesome.  It even has the Onion page a day calender.  I suppose Dilbert calendars are not available. 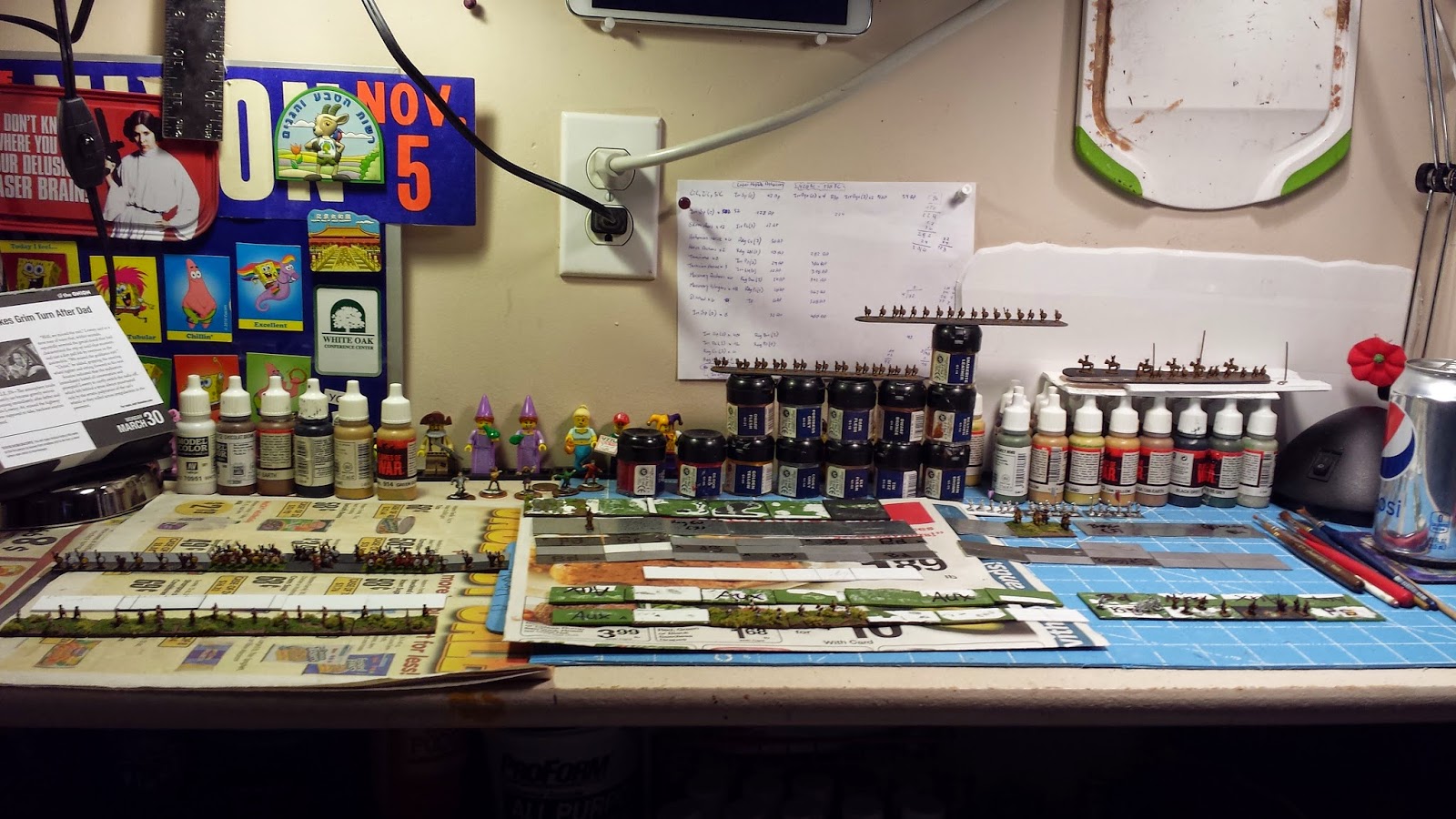 This top picture features my current all encompassing project.  I have made DbMM and all it's glory my current wargaming project.  My entire 400 point Athenian Later Hoplite Greek 2/5 army is here.  Well, the bases are here.  I have not purchased all the models.  It is a pretty big army.  Irregular Spears are pretty cheap points wise. 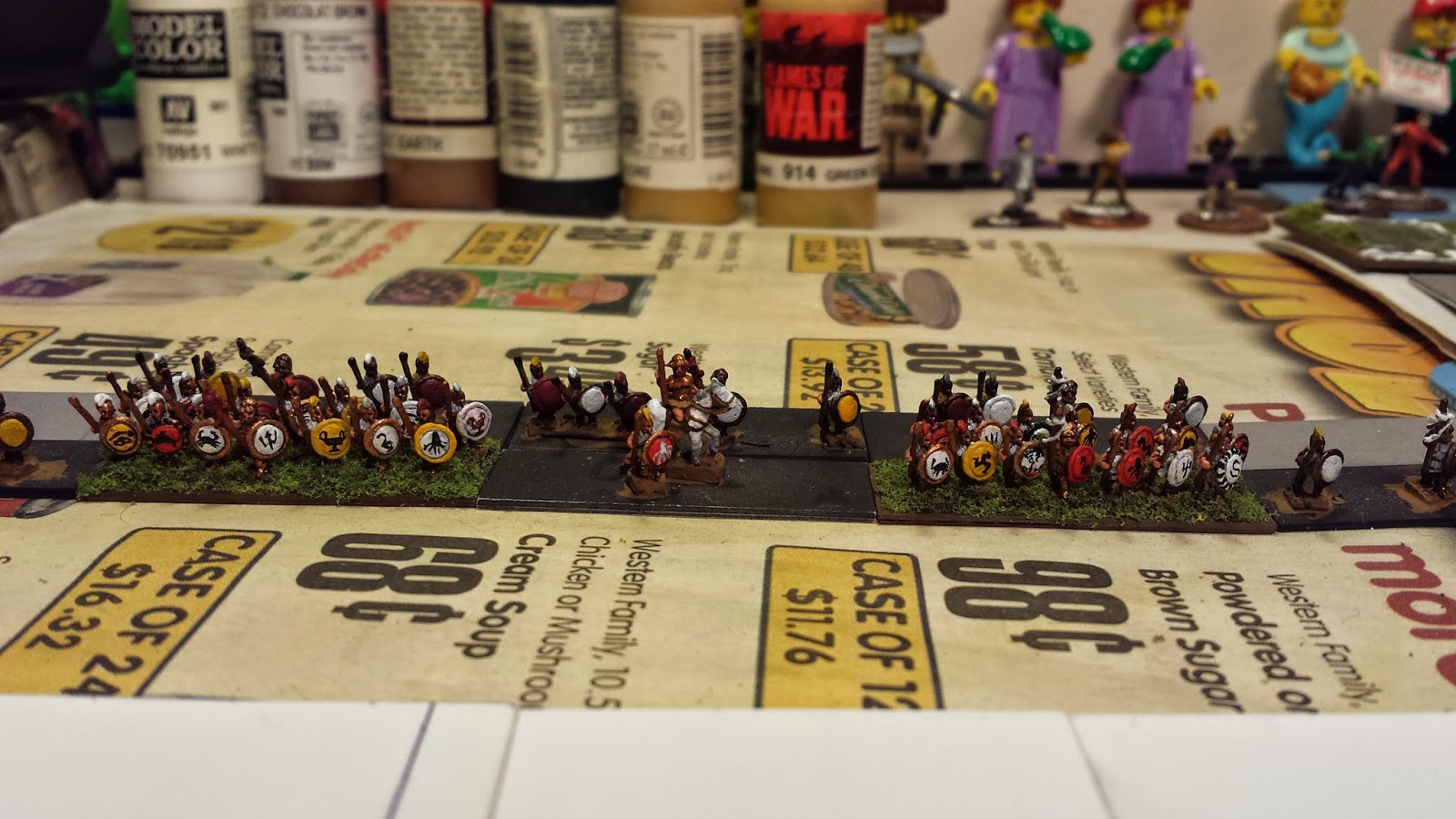 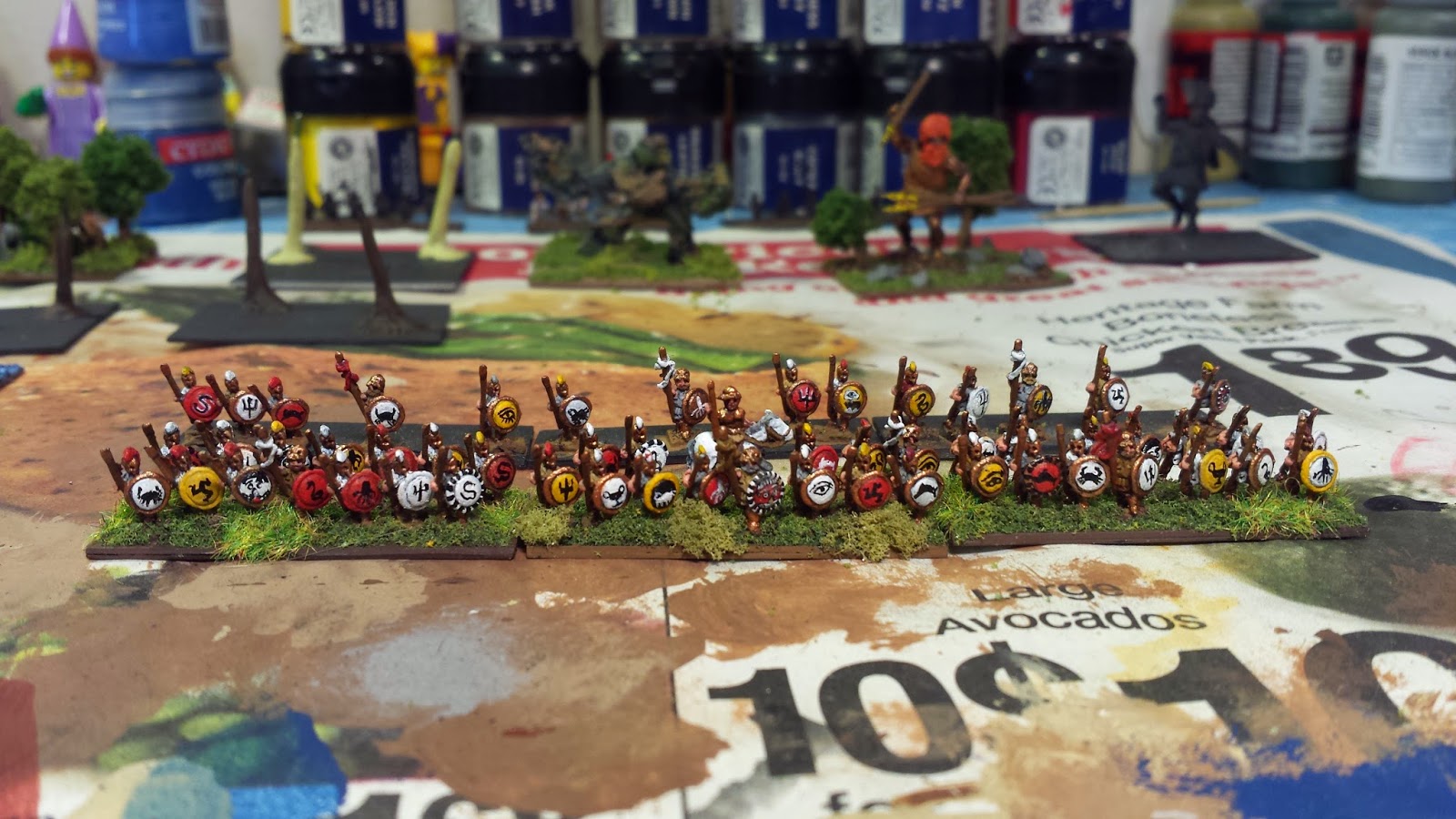 These guys are my "currently finished" Hoplites.  The center stand has a general on a white horse.  The back stands are still in the process of being finished.  I am about halfway done with those stands.  They look pretty good.  My shield painting will get better and better.  I picked ten images that Greek warriors painted on their shields.  I made each rank have a different image.  It looks good and I can see where I started and where I finished with the designs.  They keep becoming more elaborate.  The completed army should look stunning because I will have gotten much more skilled at painting the shield designs. 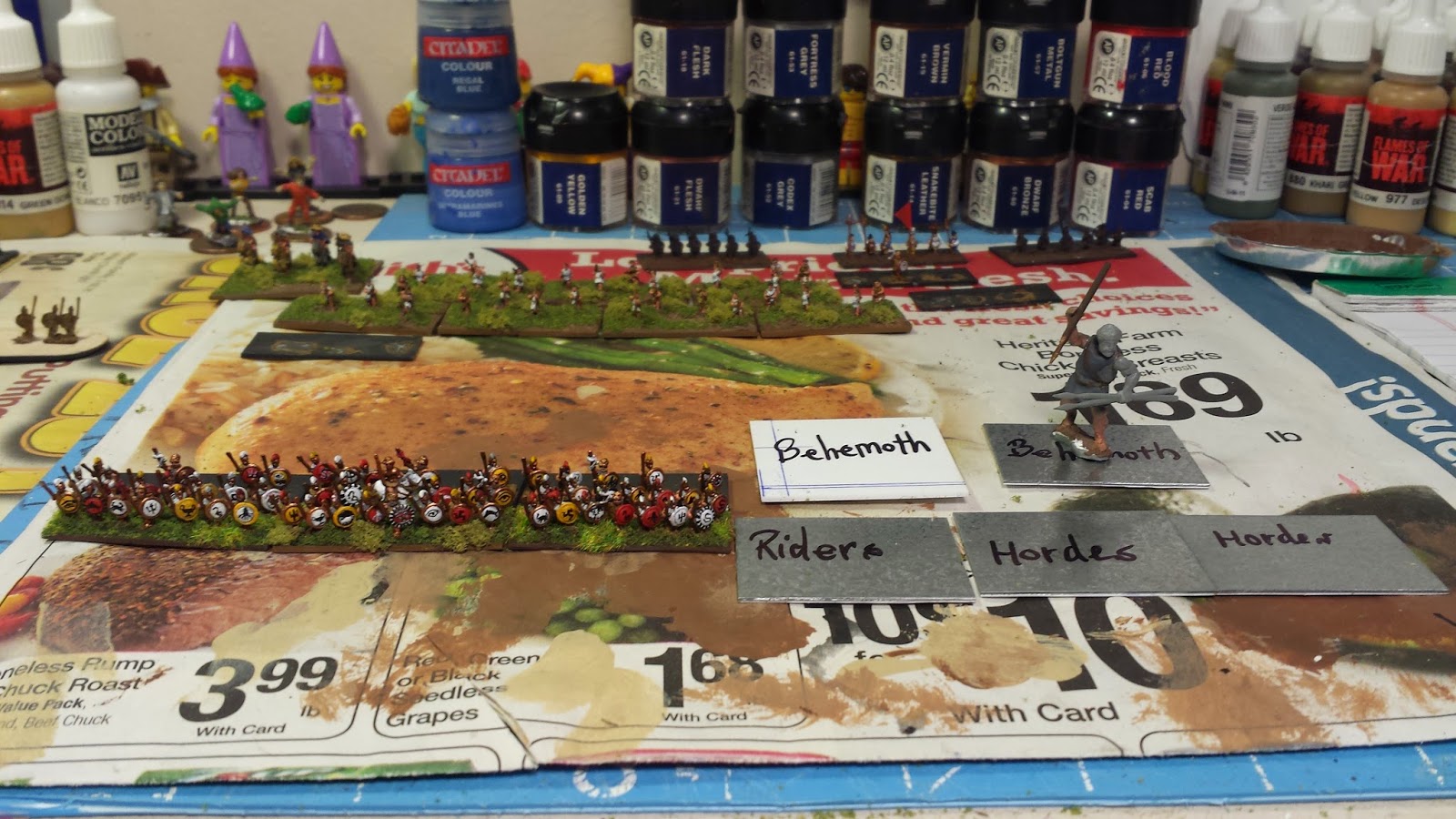 This leads me to unveil my next side project!!  DbMM and DbA have a fantasy variant game.  It is called Hordes of the Things.  The game is much more flexible with unit choices.  You get 24 points and can make whatever you want.  Since I have a bunch of Greek Hoplites I figured "Why not" and made a Athenian / Greeky host.  The above picture is the completed 24 point force.  Some of the models are primed but not ready.  It has been a lot of fun designing this force.  I do love conversions.  HoTT lets you do that in abundance. 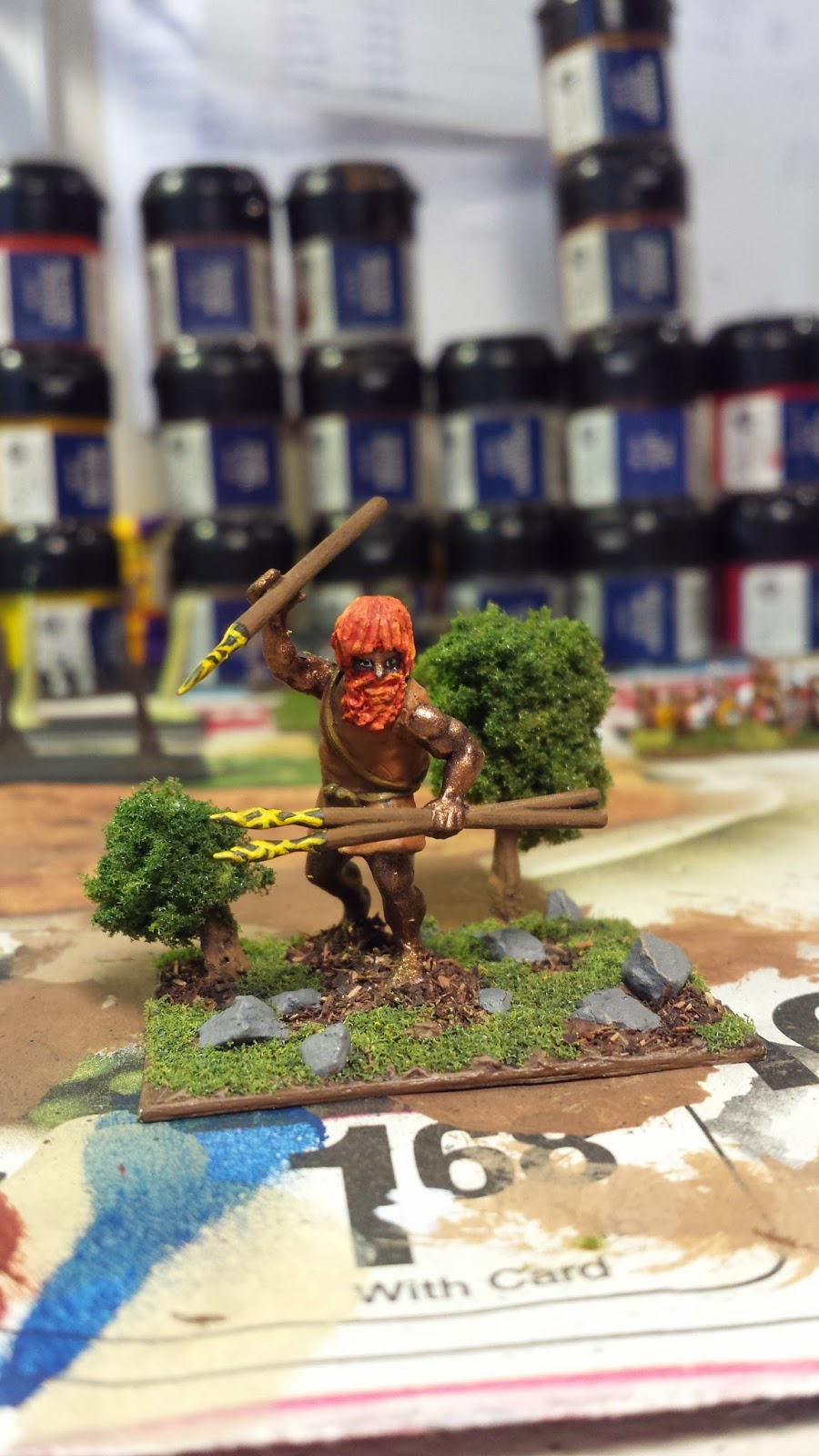 The first guy here is a God stand.  Or Zeus as he is called by mortals.  You may wondering why Zeus has orange hair and bronze skin.  I designed the image based off of John's interpretation of the angel in Revelation.  I imagine that lowly mortals cannot fathom Zeus in his true godly form.  So they see a giant man with gleaming bronze skin and a head of hair that looks like burning fire.  Zeus' lightning bolts are mere javelins crackling with mysterious energy.  When he throws them they look like massive bolts of lighting.  I am not completely happy with how the javelins turned out.  They did not have much surface area and that made it hard to make more crackling energy effects.  I would say the the models generously gives the +6 combat resolution. 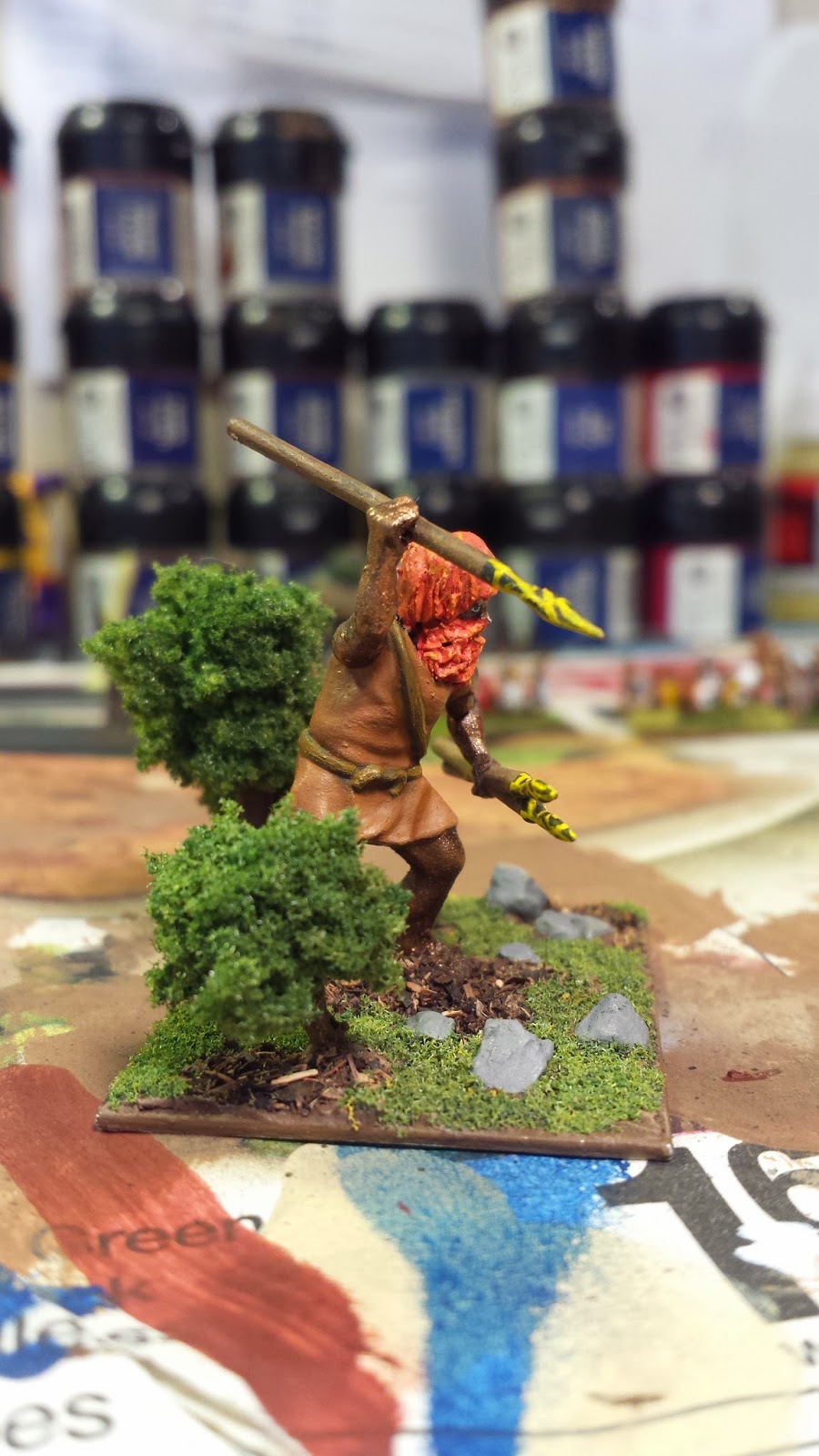 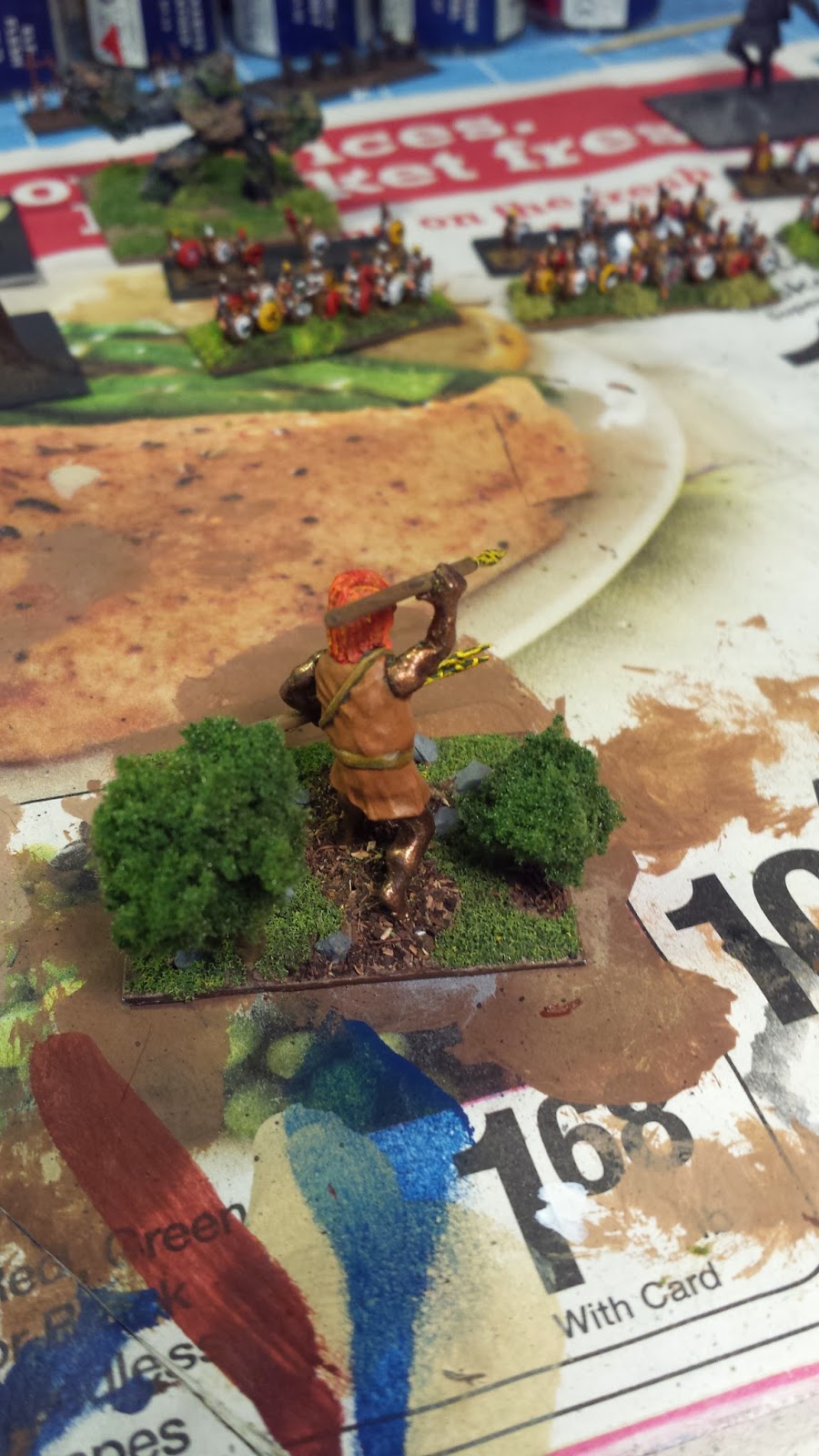 This is a behemoth stand.  I made this a few years ago as an experiment.  My rock golem was made from a couple of pebbles I found on the ground.  I think there are a few rocks from my fish tank and some fresh kitty litter scrabble. Total cost on this guy is probably 10 cents. 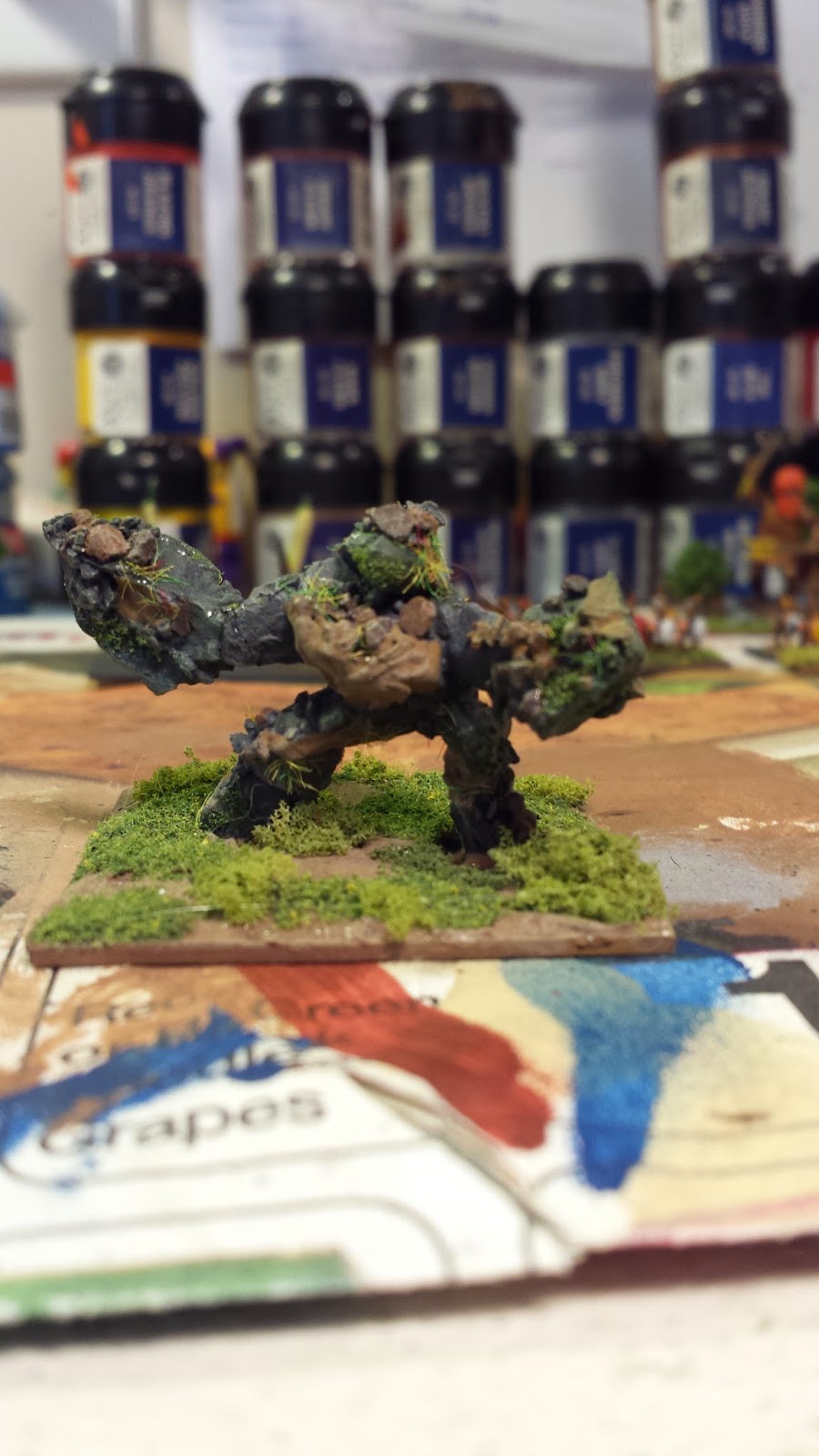 I am not using him for my Greek army.  It seemed like a good time to show him as he is mounted on a 40mm by 40mm base.  I was thinking ahead when I based him.  Hooray. 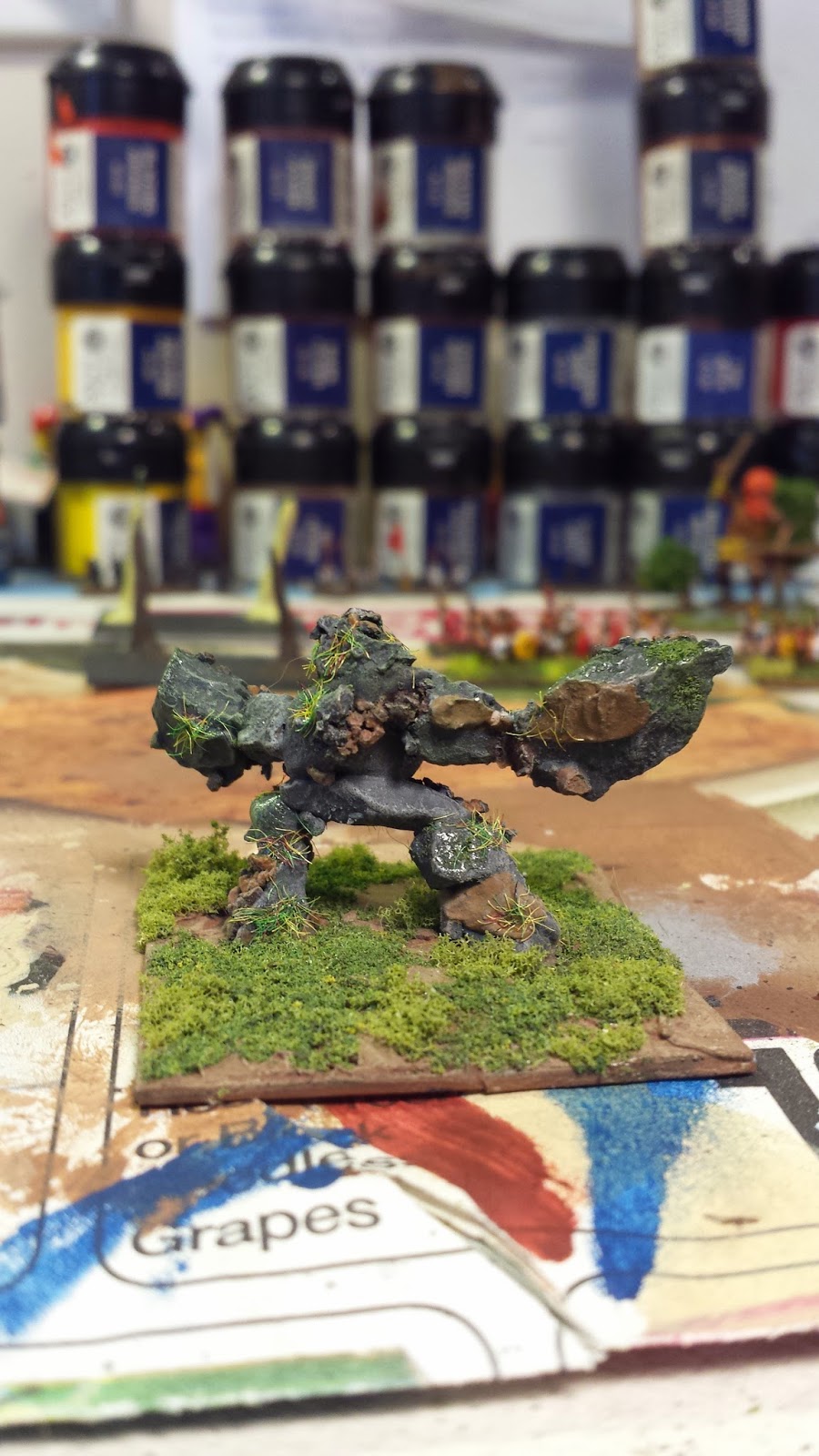 If you ask any of my friends what kind of animals I like they will probably say Lobsters.  And if they do not say that they will say Octopi.  Yeah, I know Octopuses is wrong.  I read a book by a biologist who studied giant squid.  He is a leading authority on them.  In his book he called the plural of the cephalopod with eight arms "Octopuses".  It does not really matter what you say.  Language is all about context and I think people will know what you are saying when you say Octopuses.  If you say Octopi you will sound fancy. 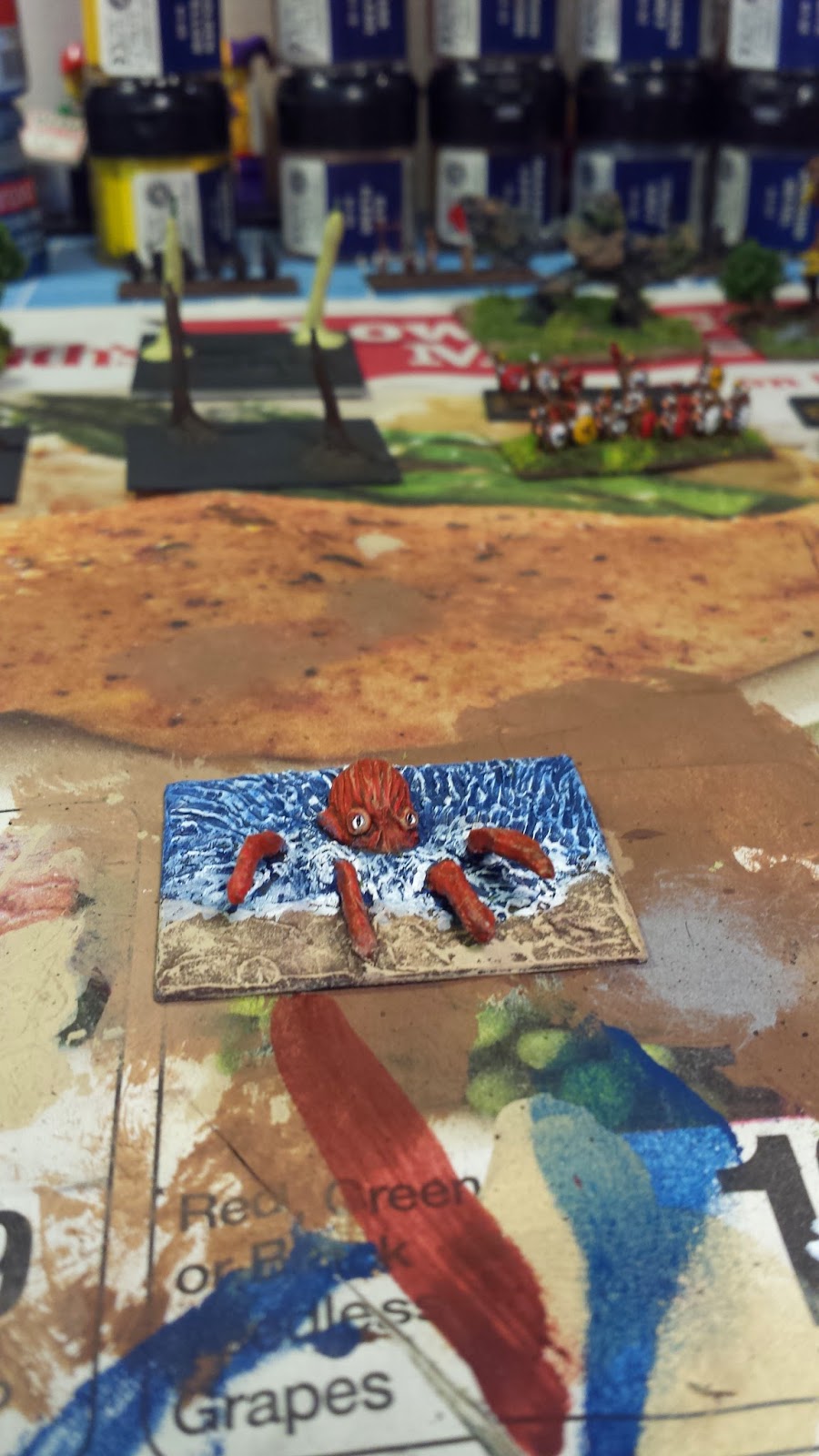 That is an odd segway into my aquatic Lurker stand.  This guy comes up out of the water to grab terrified Greeks.  Do not piss him off because he will eat you.  I actually made this for my Poseidon aquatic army.  I am going to add more later but for now Gary the Octopus will do.  He was lots of fun designing and painting.  I feel like he will chew up the furniture by being a lowly Lurker and not a more terrifying behemoth or whatever.  My advice is to steer clear of any water based terrain.  Gary is salt water friendly but he can live in fresh water. 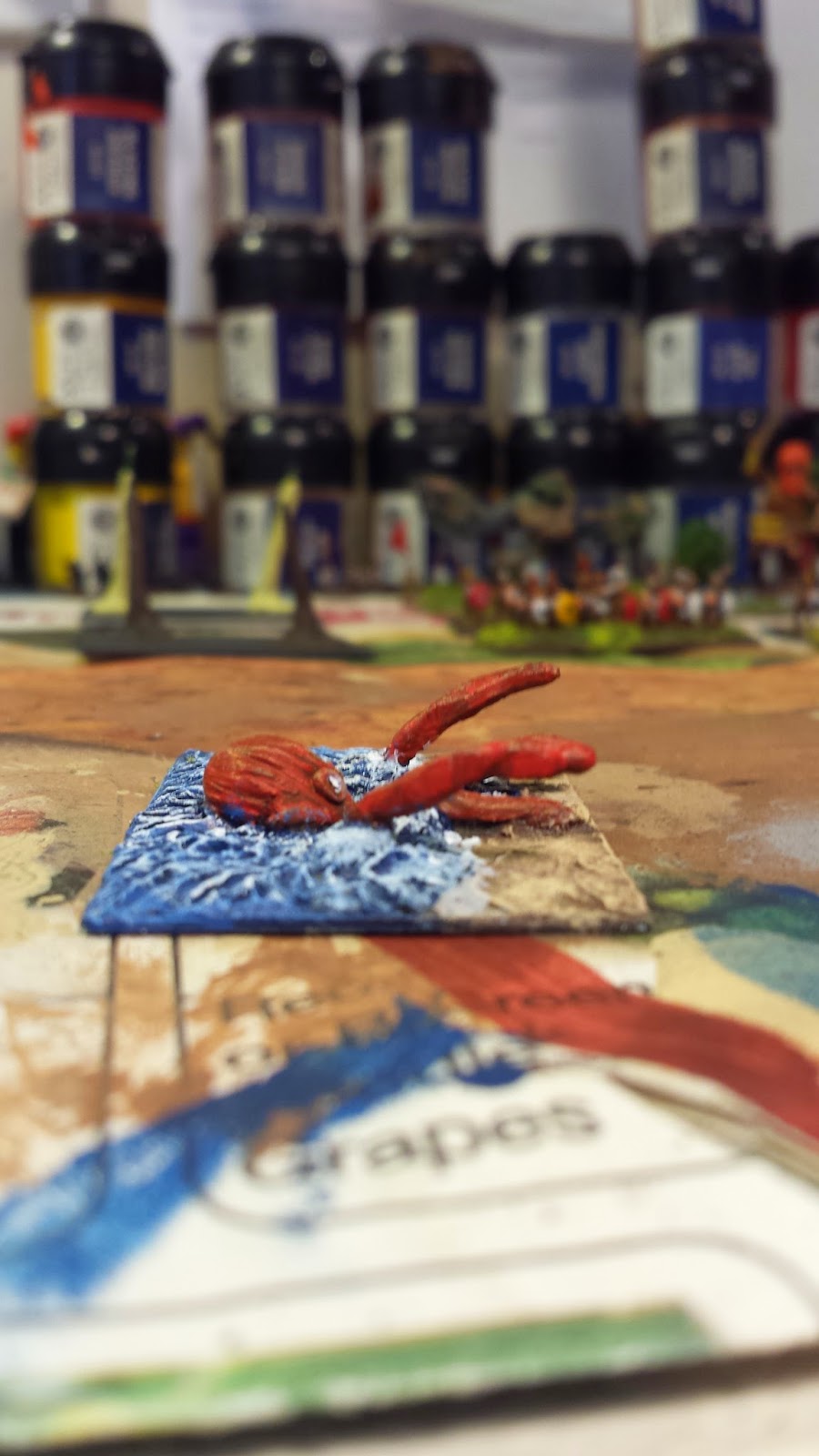 Check out the blow hole on the right side of his head thing.  I really like that touch. 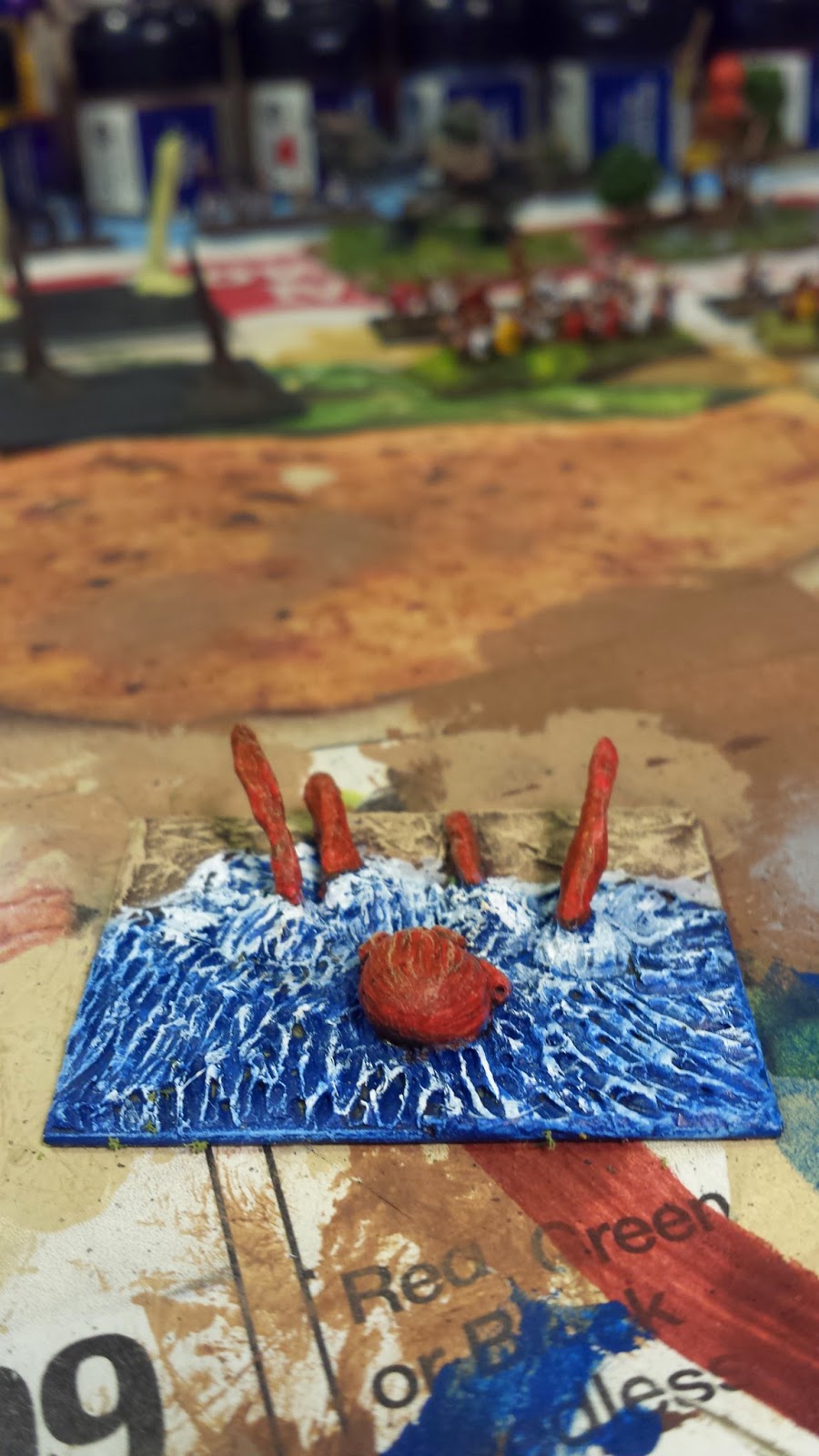 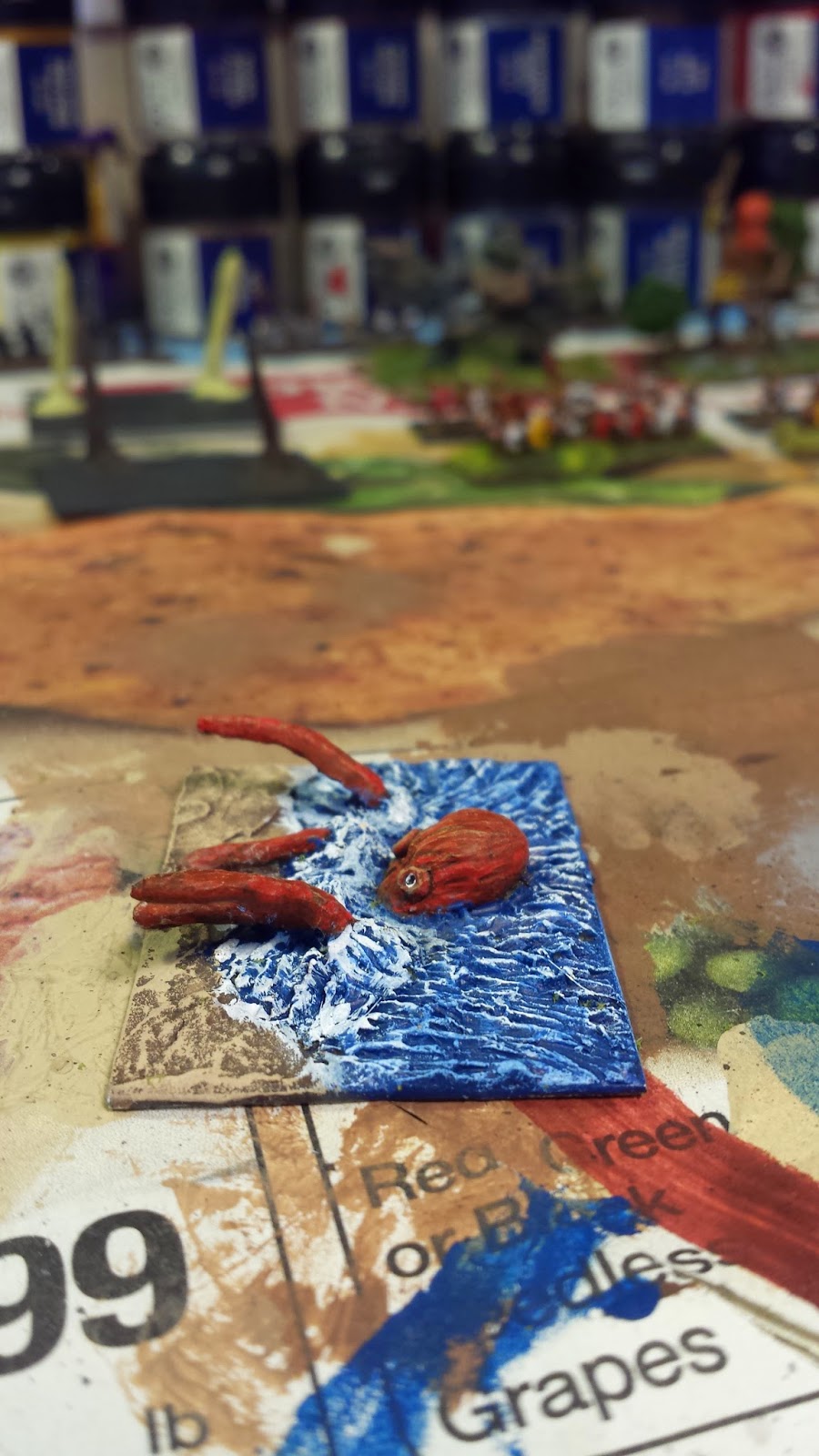 Aquatic Lurkers are fairly limited if there is no water for them to hide inside.  I should explain how Lurkers work in the game.  They are not deployed on the table at the beginning of the game.  They appear once an enemy stand moves into or on the edge of an aquatic piece of terrain.  I decided to make some aquatic scenery to give Gary some stomping grounds.  Here is a swamp that I made.  Look at all the lurking possibility. 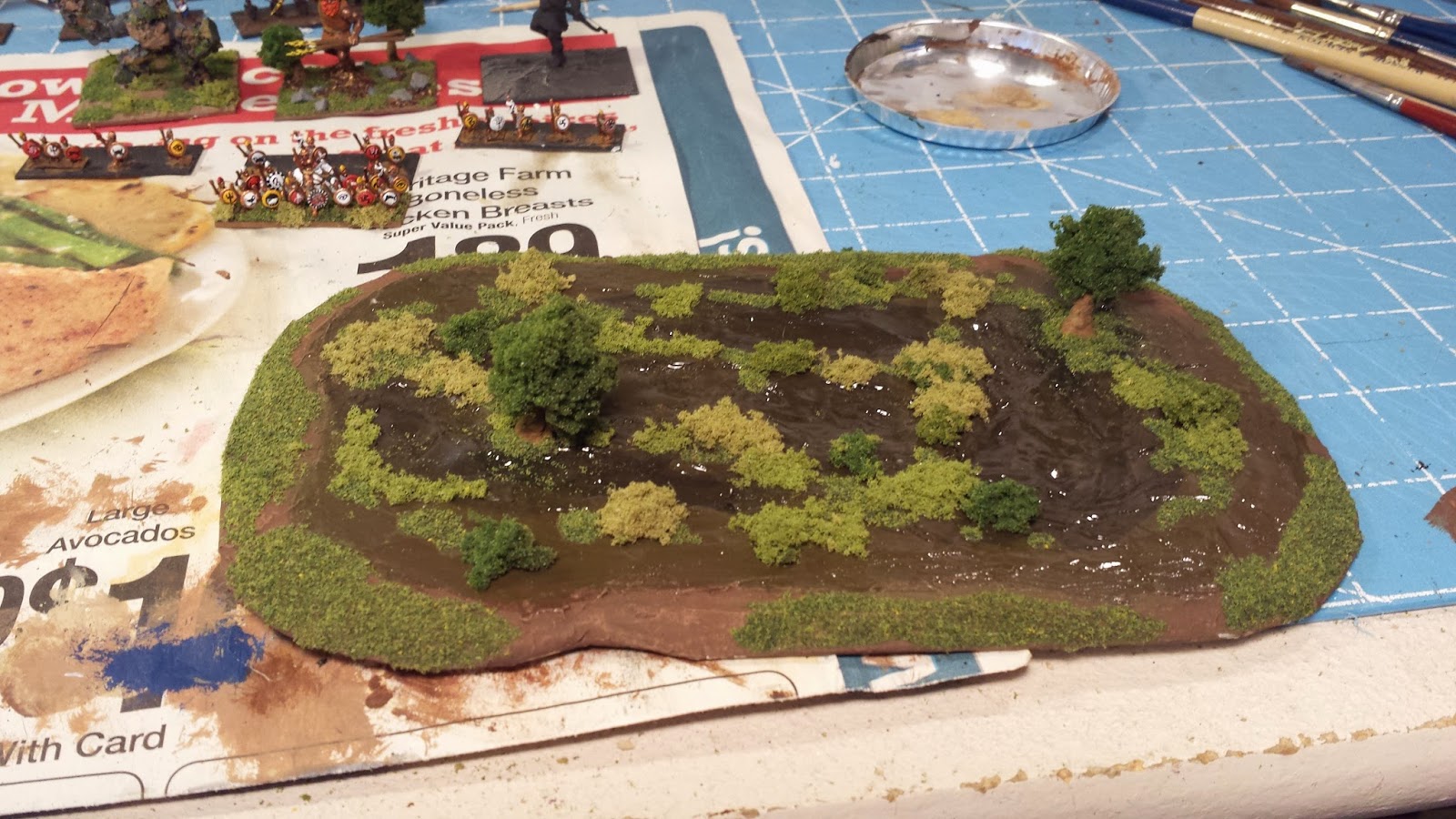 Oh Noes!!!!!  Some foolish Greeks decided to take a short cut through the swampy ground.  Gary is eating good tonight.  Those poor guys do not stand a chance.  They may beat Gary back but he can always come back later to cause more trouble. 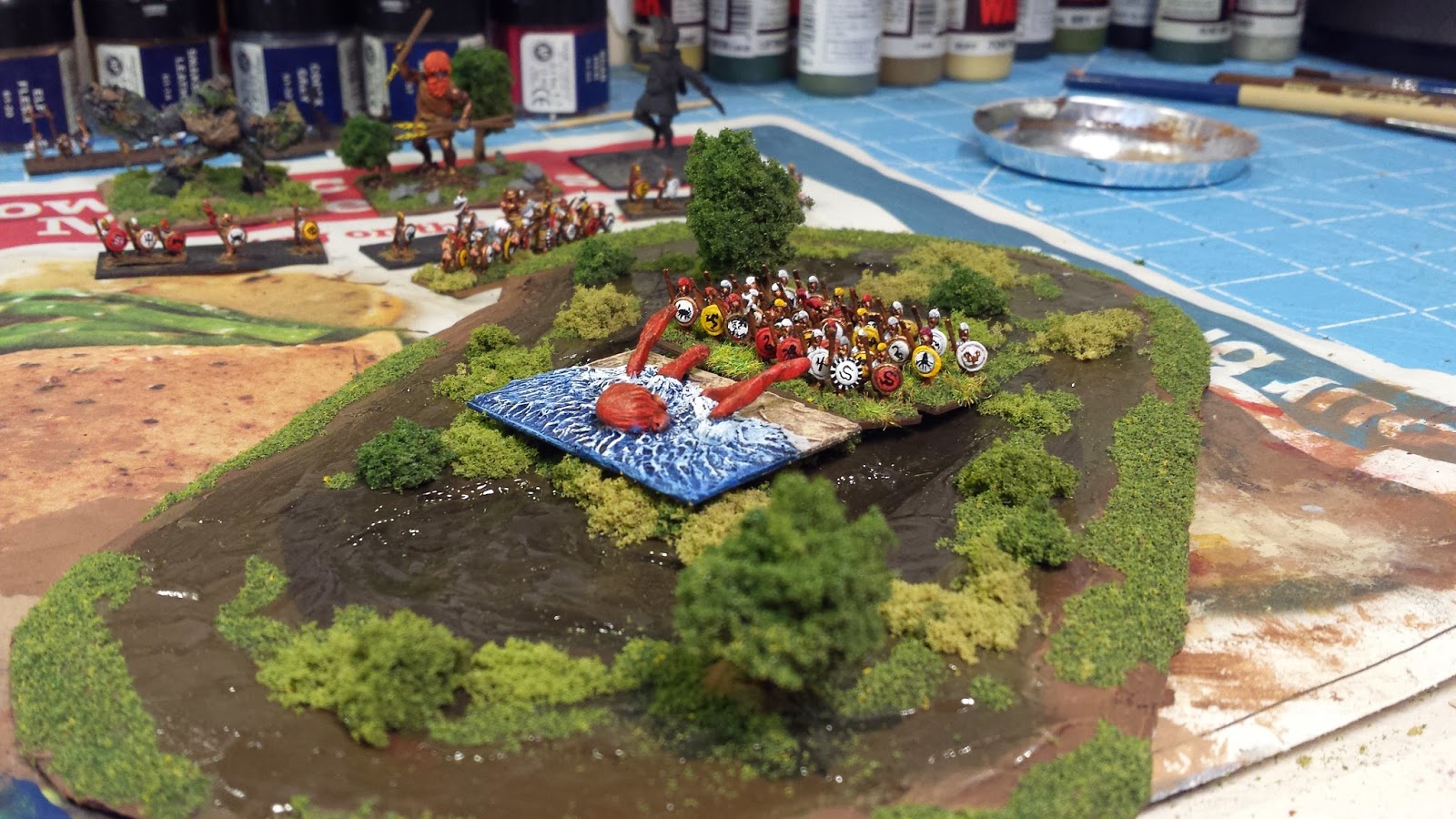 These Centaurs are hard to see.  But I think that reflects their nature.  They are my Rider stand.  A Rider is a unit of lightly armed fast cavalry.  They focus more on charging up to the enemy line, letting loose some arrows and then running away in tactical order.  Centaurs are a woodland creature so they would not be impeded by rough woody terrain.  These models are from MicroWorld games.  They are great and I recommend checking out their fantasy range of 6mm models. 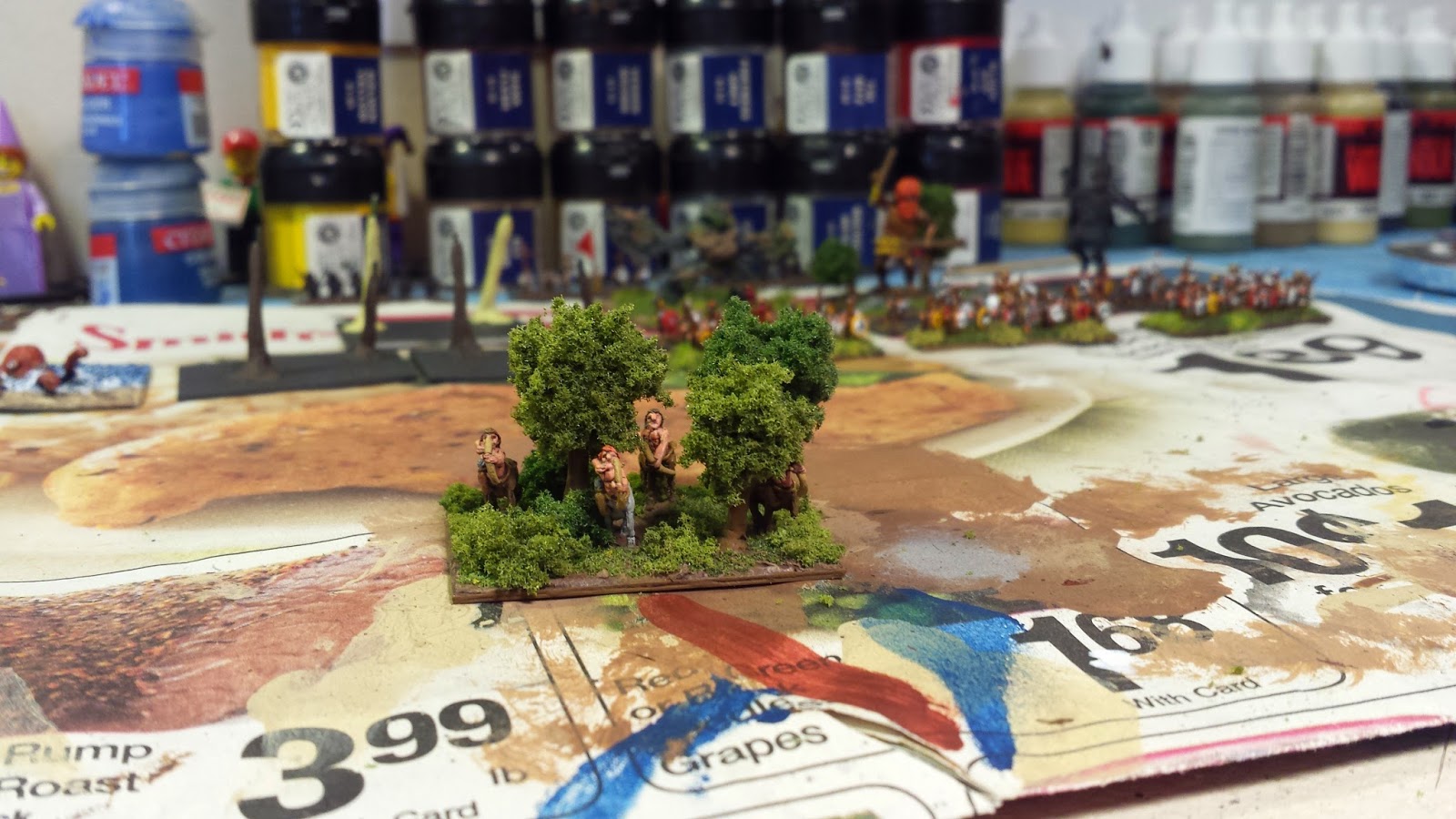 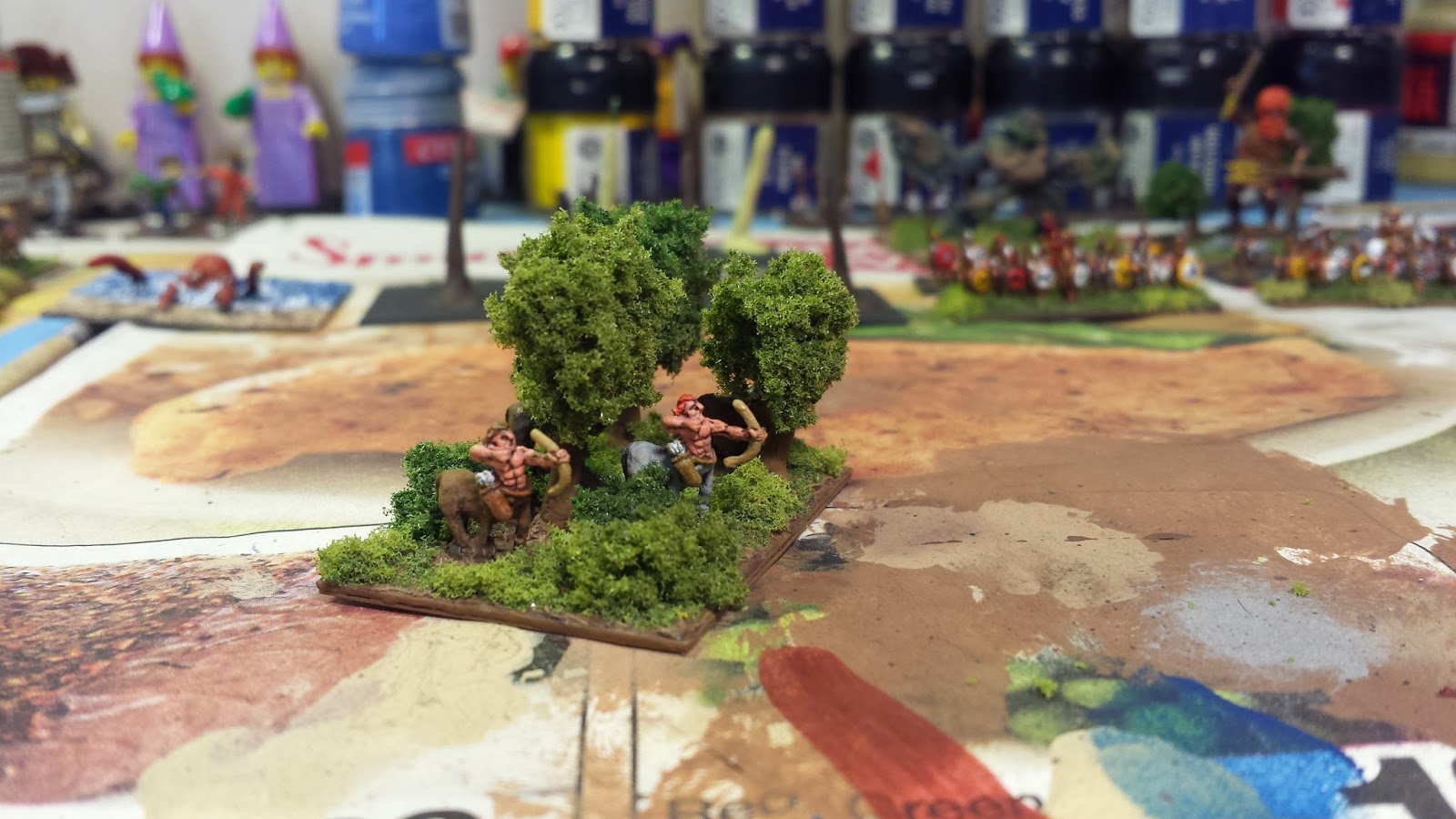 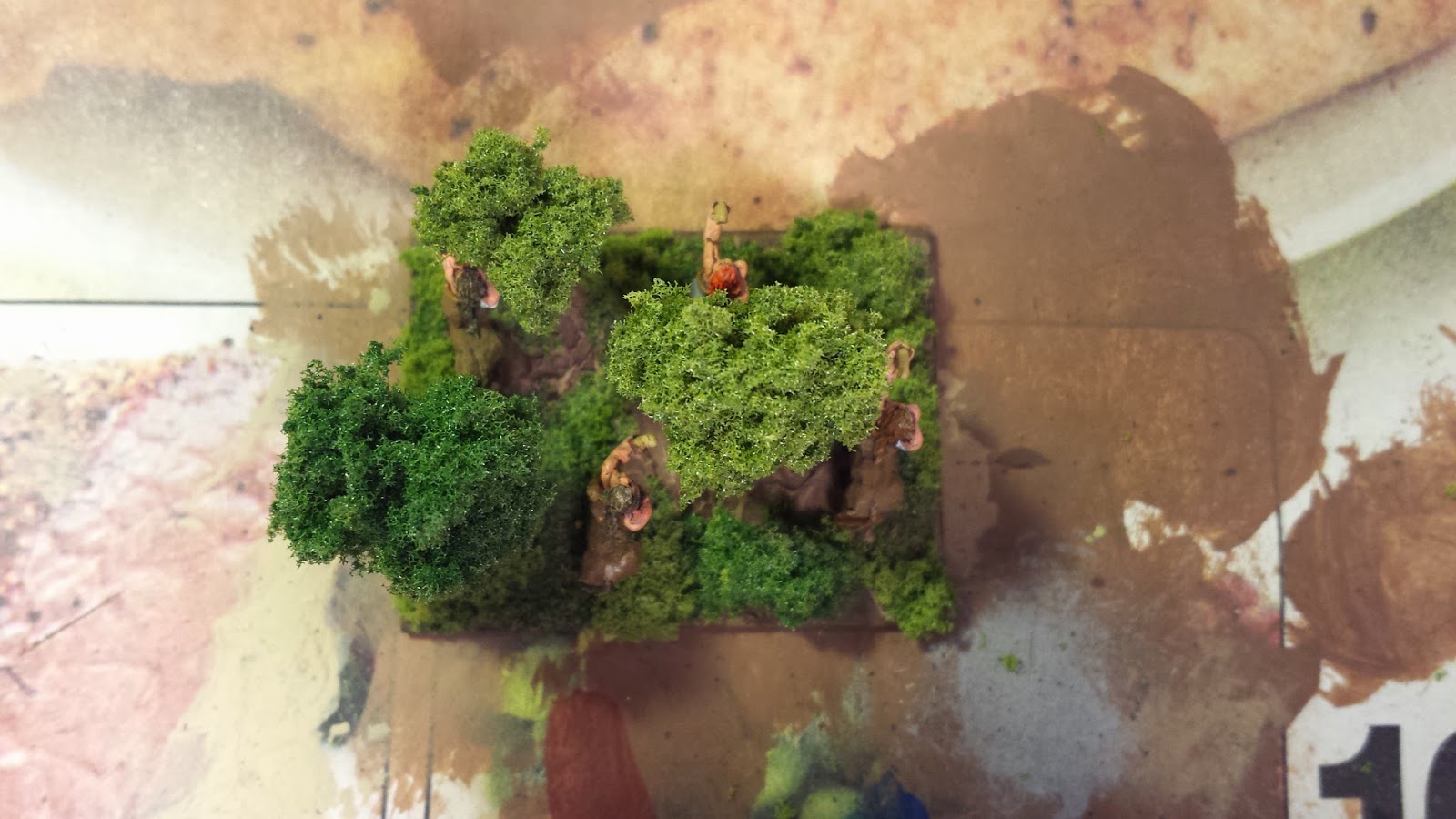 The only downside to the models are that they have one pose.  I made one guy with his bow lowered and pulling out another arrow.  I had a terrible time getting a decent shot of him.  The models are still great and I am excited to work on the two horde stands of fauns. 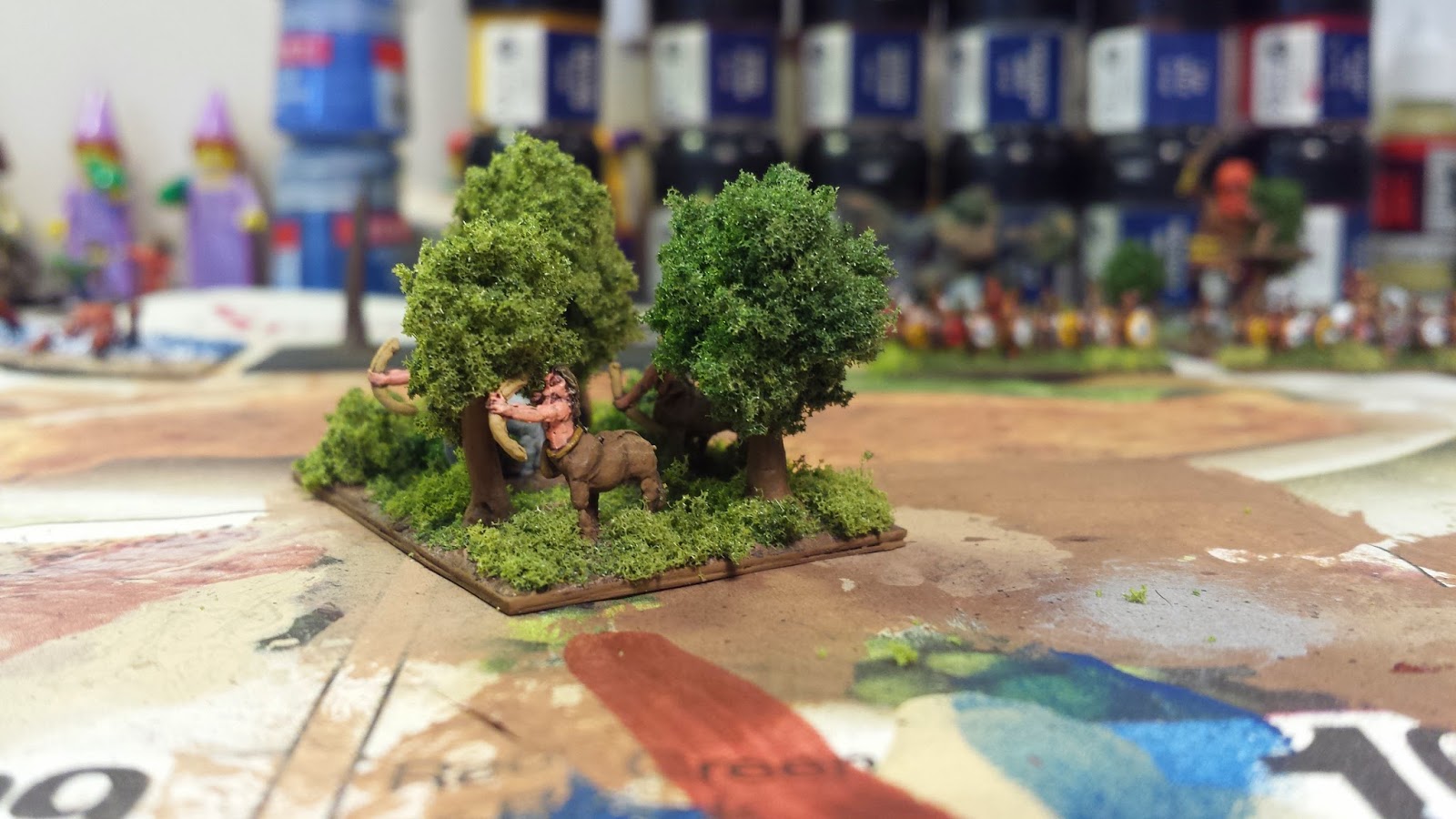 I had so much fun working on these models.  I hope you enjoyed looking at them.
Posted by NerdWargamer at 9:58 AM No comments: